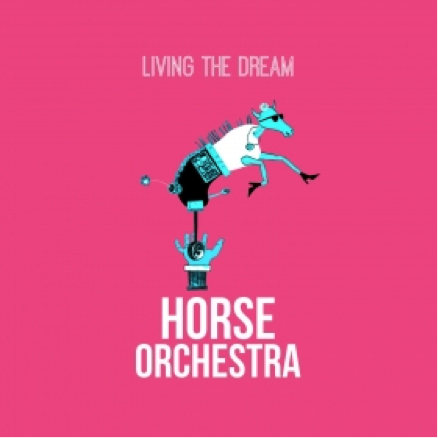 Very much in the spirit of Available Jelly or Mostly Other People Do the Killing, the seven-piece Horse Orchestra brings an irreverent approach to its melding of disparate styles within the jazz tradition.  The musicians hail from places like Iceland and Sweden, although their home base is in Copenhagen.  While they are not quite as self-consciously disruptive of jazz orthodoxy as MOPDTK, you can definitely hear these guys’ willingness not to take themselves too seriously, as well as their determination to make sure everyone’s having a great deal of fun, most importantly.

Recorded before a very enthusiastic live audience, these mostly short pieces (only a couple last longer than six minutes) provide some appealing grooves, often with a New Orleans-style sensibility.  Although the group has a bass player (Nicolai Kaas Claesson), the rhythm section relies more heavily on a tuba for the low end (capably played by Kristian Tangvik)—all the better, really, for keeping the New Orleans vibe going.  The second track, “Doctor Jazz,” is a good example, where the guys play a Dixieland-ish up-tempo number essentially straight, with a particularly effective double-time section toward the end that brings the house down.  Other tracks offer complex post-bop themes, often with precise, disciplined ensemble playing that is quite impressive.  Although the band does integrate more abstract, “free” improvisation within its music, the freer aspects of the songs are usually limited to a few interludes here and there within pieces that are otherwise really tightly structured, and the group is at its best when it’s dedicated to keeping the groove going.  On those occasions when the band tries more deliberately to inject its postmodern whimsy into the music, it sometimes comes off not as liberating, but as meddlesome.  This is apparent on the record’s fifth cut, “Erbarm Dich Mein, O Herre Gott,” which is actually a rather beautiful rendition of a J.S. Bach piece (!), until the group’s drummer, Rune Lohse, starts cluttering things up with assorted bangings on the drum kit.  This kind of thing can be effective in some contexts, but here it just seemed to get in the way.  (To be fair, the same has been said of veteran groups like MOPDTK, as at times their iconoclastic subversions can detract from, rather than enhance, the power of the music.)

The solos on the record are also somewhat uneven.   While tenor saxophonist Ingimar Andersen has an intense, slash-and-burn segment on “Voice Audition,” the record’s seventh track, his solo on the record’s ballad “3” was less inspiring, as he seemed much more tentative and unfocused when dealing with a cooled-off tempo.  And although pianist Jeppe Zeeberg is quite strong throughout most of the tracks, his solo on the breakneck-speed “Nackte Frau Mit Brille” seemed never to fully get going.

Although a bit more seasoning will take the members of the Horse Orchestra to the next level, one can’t fault them for the energy and zeal they bring to their music, and this is an enjoyable and stimulating recording overall.