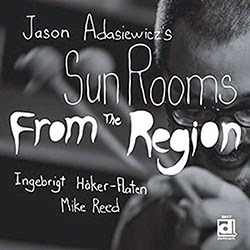 A vibes trio album for me can go one of two ways, fully engaging or background music. Luckily, and amazingly I might add, Adaisiewicz’s Sun Room seemingly creates both. On this, the third release from the trio, Adaisiewicz is with Mike Reed on drums, and newcomer Ingebrigt Haker-Flaten on bass, replacing Nate McBride. Haker-Flaten continues adding a steady bass, picking up for McBride flawlessly. Having listened to the previous albums, Spacer and Sun Rooms, multiple times, I can say this is right in line with those two releases. Adasiewicz is always engaging, and lets be honest, there are not many vibraphone players these days, especially playing in a freer form.

If your unfamiliar with Sun Room, it should be noted that they play with a larger focus on swinging. This isn’t to say you can’t hear Adaisiewicz patterned twinkling/pounding of the vibes, but if your expecting Adasiewicz to sound like his duet with Peter Brotzmann or his endeavor with Rob Mazurek and Starlicker you may be disappointed. But I definitely recommend giving this a chance. You will find within the toe-tapping that is inevitable, that you will look at your speakers and wonder just how Adasiewicz does it. With Reed powering the band, Adaiewicz and Haken-Flaten show massive amounts of creativity. From the opening of Reed and Adasiewicz on “Leeza”, to the assault of Adasiewicz on his vibes halfway through “The Song I Wrote For Tonight” you will be engaged. Hoken-Flaten opens “Two Comes One” with a beautiful solo, eventually being met by his bandmate Adasiewicz into a tug and pull propelled by Reed. A beautiful set of tracks, though not everyday listening for myself, something pleasant that you can put on and enjoy, especially if, like myself, your other half may be tired of hearing all that “noise”.

This trio, with IHF on bass, played our jazz festival this year and were fantastic. Really looking forward to picking this up.