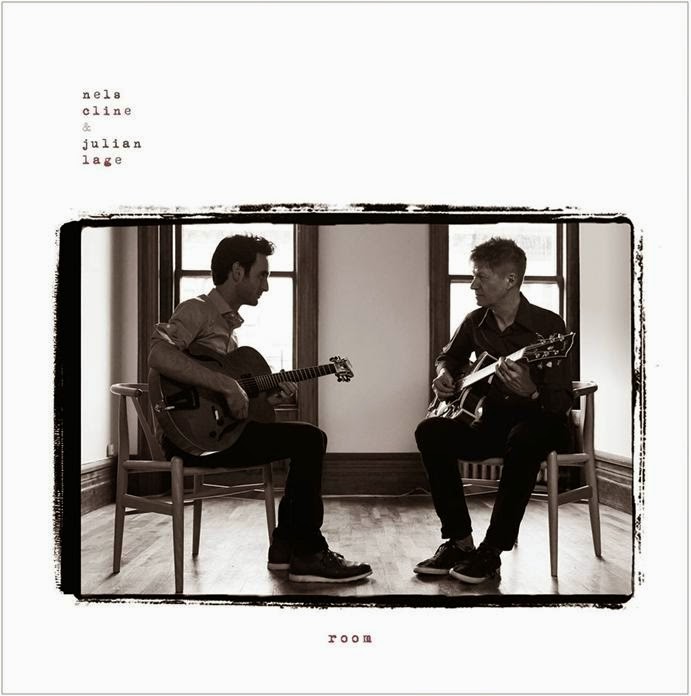 The guitar duo is one of my favorite musical settings – it has it all: camaraderie and creativity, volume and versatility, and so many vibrating strings. In late spring of 2012 I caught the then new duo of Nels Cline and Julian Lage playing as an opening act at a show at Le Poisson Rouge and their music has been lodged in the back of my mind since. I plunked down a little too much cash for a single they released called 'Racy' and crossed my fingers for a full length release. Enter Room.

So, as you now know, I'm biased towards this configuration and with completely clouded judgement I can say Room is a fantastic recording, genuinely living up to my expectations. The album is balance of composed and spontaneous parts and is well served is by the potent mix of the ever inventive and evolving Cline and the disciplined and devilishly good Lage. From avant-garde noise to alt-rock (can I still use that term?), Cline is up there pantheon of guitar greats. Lage comes from a more traditional jazz background and has worked with many prominent musicians such as Fred Hersch and Gary Burton. Here, the two guitarists blend impressively - be it chordal romps, arpeggiated forays or improvised sparring - to create a cohesive sound that remains captivating all the way through.

The album begins with 'Abstract', in which the sounds of crisp clean guitars single note lines and double stops play off each other. With loosely agreed upon passages rapidly breaking into free association. 'Racy' is next, featuring synchronous lines, rapid chase sequences, and nice solo turns. 'The Scent of Light' follows and its a much more open and spacious piece, it builds over nine minutes with repetitive phrases and contrasting patterns, this one in fact reminds me just a little of Cline's work with the Acoustic Guitar Trio. Track-by-track the variety and diversity of styles, approaches to playing, and the mix of straight ahead and free playing all expertly unfold.

Room was worth the wait. These two expert guitarists, coming from different places, have met in a space where their individual voices support each other and virtuosity takes a backseat to their music making.

Cline and Lage are playing on Tuesday the 25th at SubCulture in NYC.