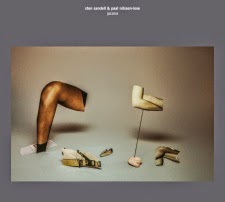 Combining piano and drums in a duo setting is hardly a daring proposition, as the two instruments go together quite well. On the one hand, they seem to complement each other almost perfectly, with the piano’s potential for near-orchestral fullness counter-balancing the drums’ “skeletal” properties. On the other hand, there’s also some overlap between them, due to the fact that both generate sounds percussively. It’s a constellation that can yield great results when appropriately exploited, making, in such cases, for a tightly knit yet wide-ranging sonic union. That being established, it’s all the more surprising that the duo of Swedish pianist Sten Sandell and Norwegian drummer Paal Nilssen-Love doesn’t quite succeed in producing that kind of instrumental union. Indeed, considering the duo’s unimpeachable musical pedigree, which includes incendiary outfits such as The Thing, Scorch Trio and Lean Left in Nilssen-Love’s case, and a history of performing works by New Music luminaries like Xenakis and Cage in Sandell’s, you’d expect nothing but a flawless success of them.

To be clear: Jacana is by no means a bad record. Its three improvised tracks, which were recorded live at the Kongsberg Jazz Festival in 2013, offer a fair share of good and even great moments. Sandell, in particular, provides some very fine pianistic moments, from seamlessly woven tapestries of notes to thundering chords that could shake the gates of heaven, and further on to the alien abstractions of extended technique (although that last element isn’t as prominent here as might be expected of a frequent performer of New Music). Moreover, he engages in some very deep and low vocalizing on the second track Kauri, which, in combination with his sinister chords and runs on the piano, resembles Varèse’s Nocturnal, and perhaps some Schönbergian ballads. But occasionally – and this is where we get to the downsides – the music fails to attract the listener’s attention, running on for minutes without producing anything substantial. Nilssen-Love’s contributions here might be part of the problem; he’s a drummer I hold in very high regard, but here, he’s often content to inhabit the supporting role, rarely stepping up with attention-grabbing ideas of his own. Besides, he doesn’t always respond in the ideal way to Sandell’s pianistic propositions, sometimes employing drum-kit-devouring rolls where a sparser, more disjointed approach might’ve been a more appropriate answer.

But then again, this is far from bad, and if this might appear to be a bit of a letdown, it’s only because of the very high standards these excellent musicians have set for themselves on previous records.

Hmm, what can I say but that I happened to like this album quite a bit. I also especially appreciate the fact that not too many piano-drum duos come along now. (Yes, Cecil capped the heights on that genre in Berlin, but still....). I did notice that all three of the piano--drum duo albums reviewed on the site received the same desultory 3.5 stars, rather than the now standard mediocre 4. Apparently not a beloved form.

I wasn't aware that on a scale of 1 to 5, 4 was mediocre and 3.5 desultory. Presumably, 5 is only just better than mediocre, or - God forbid - just plain good.

Relax, I was being facetious, but the star ratings do remind me of Lake Wobegon, "where all the women are strong, all the men are good looking, and all the children are above average."

I really loved this album. I thought the playing by both musicians was outstanding. I would highly recommend this album. I would encourage everyone to read the reviews (for they are very informative and well written) and then give a listen before making up their minds. One man's trash is another man's treasure as they say. I would be much poorer as a lover of music if I hadn't given this a try.