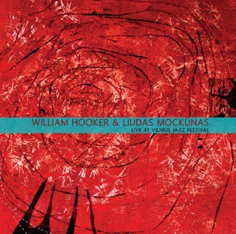 68-year old William Hooker is a veteran of the New York loft scene, his first album was released in the late 1970s, it was a band with David S. Ware and David Murray. Throughout the years he has been a very influential drummer, especially since he recorded a lot with people from the alternative noise rock environment like Sonic Youth’s Thurston Moore and Lee Ranaldo, musicians (very often guitarists) that come from “outside” jazz, as Hooker once put it. But he has always teamed up with “inside” jazz people too, and some of this music has been recorded by NoBusiness, a label Hooker really likes. For example there is “Crossing Points” with the late Thomas Chapin or “Earth’s Orbit”, an album with Darius Jones and Adam Lane. Hooker is not interested in genre bounds, instead he has been searching for new forms of music.

In 2013 he was invited to Vilnius to play with Lithuanian saxophonist Liudas Mockūnas. In an interview Hooker mentioned how much he respects Mockūnas and how much he liked the performance calling it “excellent” and “captivating”.  And this is what it is indeed.

Hooker is always able to bring dramatic tension and human warmth to avant-garde jazz mainly by using his drum set to the extremes – he either concentrates on the high sounds of the cymbals or the deep and mumbling sound of the toms. This makes his style very unique, although you can hear Elvin Jones and Milford Graves as well as Rashied Ali and Sunny Murray as important influences. In front of this background Mockūnas integrates Colin-Stetson-like sounds and techniques, eerie howls and violent outbursts that remind of Mats Gustafsson and Peter Brötzmann and excellent techniques Evan Parker could have used as well.

So it is no surprise that “Live at Vilnius Jazz Festival” is full of highlights, for example when both musicians go crazy in the first track ID, or Mockūnas’ playing a shivering spiritual sax melody in front of Hooker’s bumpy drums in IDEA, or the balladesque beginning of IDEAL. The last track, IDOL, nails everything down – the beauty, the agony, the joy, the easiness of their playing – with Mockūnas blowing his soprano onto (!) a chair.

The music Hooker and Mockūnas play is about consciousness, it is about attention, about being awake, being present, not only about playing licks or preconceived stuff; it’s about making people work in a certain context, in this case a marvelous duo conversation. This duo can easily compete with today’s great sax/drums duos of free jazz like Peter Brötzmann/Han Bennink, Mats Gustafsson/Paal Nilssen-Love or Kidd Jordan/Hamid Drake – Hooker and Mockūnas seem to have found each other.

William Hooker once said that he simply wanted to make great music with great people. This is what he has accomplished with this album.

“Live at Vilnius Jazz Festival” is available as a CD and can be bought from the label and from InstantJazz.