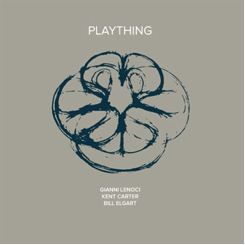 Watching the German football team in the world championships semi-final against Brazil was a celebration of grace, efficiency and perfection. The team had just put on one of the all-time great performances, it was everything that constitutes the beauty of this game. The Guardian said it had been a masterclass, that no other word did it justice. Watching it was simply awesome (if you weren’t a supporter of the Brazilian team) – and I have been a very critical fan of the German national teams (Colin once criticized me for “cheering for the enemy” when I admitted that in the 1980s I had rather supported the English team instead of the horrible yet successful way the Germans had played then).

Listening to Gianni Lenoci (p), Kent Carter (b) and Billy Elgart (dr) is like watching such a well-rehearsed, perfect team. They are able to draw from the rich history of piano trios, like a good football team they can change their style whenever it is needed, they surprise their audience with a cornucopia of structures, sounds and improvisational ideas. When they swing they sound like Bill Evans’s classic trio (for example in the title track), they can explore new classical music (in “Leeway”), there is bumpy free jazz á la Alex von Schlippenbach’s famous trio as well as the meditative, dark atmospheres Keith Jarrett’s trio delves into when they are at their best (including some Pink Floyd drumming in “Drift”), they confront their audience with prog rock breaks in “Kretek” or repetitive minimal patterns in “Spider Diagram” which is then again contrasted by ECM “kitsch”.

And everything is displayed by marvellous musicians: While Kent Carter, whose bass playing is monstrous on this album, and while Billy Elgart has got an outstanding reputation especially in Europe (although he is American) for his albums with Paul Bley, Gianni Lenoci has been new to me. But he has played with a lot of first class musicians like Steve Lacy, Joëlle Léandre, Enrico Rava, Don Moye, Han Bennink, or Paul Lovens (to name just a few). His style is the real sensation on this album – suppressed, even reluctant (it reminds of Eve Risser), he also prepares his piano and uses extended techniques. On the other hand he can accelerate and slow down at the right moments. He is clearly the captain of the team (all of the compositions except the title track are from him) and therefore responsible for one of the most surprising and best albums in 2014.

“Plaything” is available as a limited vinyl edition of 300 copies only. You can buy it from Instantjazz or from the label , where you can also listen to some samples.