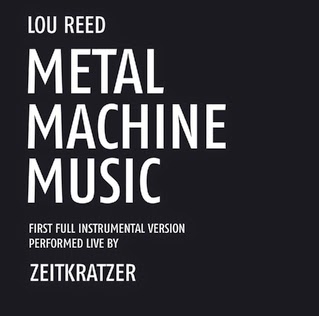 By Paolo Casertano and Martin Schray

Martin:
One of Berlin’s most exciting larger new music ensembles is Zeitkratzer (German for time scratcher), a collective which has played music as different as Arnold Schönberg’s Pierrot Lunaire, folk music, La Monte Young compositions or – on their newest album – Lou Reed’s Metal Machine Music. They call their music “sound made visible” and use extended instrumental techniques – their art is at the interface of noise, electronic and improvisational music, somewhere between Terre Thaemlitz, Giacinto Scelsi and Velvet Underground, very intense, but also highly complex and textural. In front of this background it seems to make sense that they have covered Lou Reed’s seminal and maybe most mysterious album. And when I first listened to it, I was flabbergasted how well it works. It sounds more like an unplugged version of Reed’s feedback orgy, possibly like an approach to bring Velvet Underground’s “Sister Ray” to the 21st century. Compared to Reed’s shrill and painful noise tornado it sounds almost aerial and psychedelic.

Now, I know that you deeply admire Reed’s album, Paolo. Why is it such a monolithic piece of art? Do you think it is even possible to cover this music? And what do you think about Zeitkratzer’s approach?

Paolo:
Rivers of ink have flowed analyzing MMM, and in my opinion Lester Bangs’ cogitation about it stays unsurpassed. Reed called it, in one of the many and contradictory attempts to describe the work (because others keep on asking, certainly not because he needed to explain something, and luckily we will now live forever with the doubt of his seriousness on that), “an act of love for an act of music”. I have always looked at it as the sublime incarnation of our inner voyeuristic nature as listeners, a pioneering demonstration - especially in our always more digital world made of reality shows and amateurish, meaningless shootings of our lives via social networks, of the basic instinct and need of watching someone doing something with no immediate consequences except the hypnoticity of the gesture and the moment, complying in the end with a deferred pleasure. While we are listening carefully to Metal Machine Music (and I mean preferably with headphones and with no interruptions) we are not listening to the avalanches of feedbacks and hisses of the surface - even if we may like them, we are watching someone preventing us from doing whatever else, we are listening with Reed’s ears what he hears while he’s playing, he’s devouring our time, he’s not asking us to listen to him, he’s answering to our request of being overwhelmed. And that’s how an apparently solipsistic triumph becomes a shared and mutual comprehension.

Notwithstanding an unintentional detachment, I immediately felt at ease with Zeitkratzer‘s interpretation. No point of covering such a piece of work accurately, also considering the many voices involved here. I believe they used the original as a scenario, a model to explode. Everything here is clearly more under control, and we must split our attention into the different elements composing a dialogue starting before our ears. Intertwining bowings and far brasses are shaped to work as feedbacks and shriekings, in the best imaginable demonstration that no absolute value is given to a single element of a linguistic system. Everything lives and gains in significance especially in comparison with everything else.

After all, the less known subtitle of MMM is “the Amine ß-ring” which – as everyone knows here – is one of the “dextrorotory components synthesis of sympathomimetic musics” (thanks again for this, Lou!) and in the list of instrumentation printed on the back cover of the original release you can read not just what it is used to produce the unfathomable stream, but also what it is not, up to the iconic and total “no”. In a few words: everything can be molded, each element has – even in its opposite – a suitable substitute. And this pertains maybe much more to life in general than just to the realm of music.

I think that probably what Lou Reed meant was exactly that this is not a piece of sound written and fixed one for all, but it is more a slant, a conception, a path that – sometimes – someone wants or needs to follow with no expectations about what he’s going to find along the route and no matter how far the place to reach is, if any. As Zeitkratzer did here.
I must admit that I just miss the final locked groove of the original version a little bit. The endless loop, in my opinion, remembering us that the future is the span of time between what we had in mind and what has just happened.

Martin:
The minimal groove at the end of Part IV is different in Zeitkratzer’s version, it’s less “techno”, instead it is more “classical music”, nevertheless it’s still the part where the whole composition sounds like a gigantic machine. On the one hand MMM is about noise but on the other hand I felt a bit like Walter White in the pilot of “Breaking Bad” when he was asking his students what they think chemistry is. Not really satisfied with their answers he says that to him it was the science of change. To me, MMM is also very much the music of change. This is what I like most about Zeitkratzer’s version. The different layers of sound of the original become more transparent, more apparent, more organic. The repetitive violins, the trombone drones, the glockenspiel, or the juxtaposition of the horns at the very end make the music sound like a real symphony.

It’s also interesting to note that Zeitkratzer performed MMM with Reed in the 2000s, and recordings from these shows were already released on CD and DVD in 2007. This new version was recorded at more recent, pure acoustic Zeitkratzer shows, and it’s the first orchestrated version which includes the original album’s four 16-minute pieces in full.

Zeitkratzer’s Metal Machine Music is available on double vinyl (including a download) and CD.