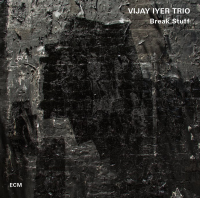 Although it’s been a few years since pianist extraordinaire Vijay Iyer’s last trio release (Accelerando), he’s certainly been keeping busy.  Last year alone he made an excellent guest appearance on Trio 3’s Wiring, some fine contributions to Arturo O’Farrill’s Offense of the Drum and a splendid classically-shaped release under his own name, Mutations.  On this recording he’s back with his regular trio, featuring Marcus Gilmore on drums and Stephan Crump on bass.  And it’s a superb document of these musicians’ continual evolution and mutual exploration.

One definite difference from the trio’s earlier releases is the choice of material: whereas the previous recordings included some eyebrow-raising inclusions (M.I.A.’s “Galang” on Historicity, or Michael Jackson’s “Human Nature” on Accelerando), here the trio’s covers stay safely within the jazz canon: Monk’s “Work,” Coltrane’s “Countdown,” and Strayhorn’s “Blood Count.”  The group remains just as committed as always to re-envisioning these tunes, however (with the exception of “Blood Count,” played straight, and gorgeously, by Iyer alone).  “Countdown” in particular is virtually unrecognizable, with only the loosest allusions to the understated melody of the original.  And the same spirit of adventure and possibility characterizes Iyer’s own compositions on the record as well.  Whether it’s Marcus Gilmore’s frenetic techno-influenced beat on “Hood” (dedicated to longtime Detroit DJ Robert Hood), or the slightly off-kilter yet irresistible rhythmic foundation of the title track, or the use of open space (and some fine arco bass from Crump) at the opening of “Geese,” each piece offers something distinctive and compelling.  Gilmore really deserves special mention, simply for the elasticity of his sense of rhythm: what frequently makes this music so fascinating is Gilmore’s ability to establish a steady pulse while at the same time subtly altering and toying with it—allowing the listener to engage each track, but never to get too comfortable in doing so.

Ultimately, the trio manages to anchor their rhythmic and melodic investigations within a sense of structure and purpose that is highly effective, giving the record’s tracks a cohesive feel, even when they’re at their most boundary-stretching.  And you can readily tell that this is a trio with deep roots playing together as a unit: there’s no ego or self-promotion involved, as the virtuosity on display is always in service to the demands of the pieces themselves.  Here’s to hoping that there will be many more recordings from this trio, as it continues to reveal new and exciting potential with each release.