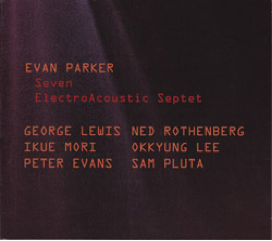 In the field of electro-acoustic contributions to improvised music Evan Parker is a pioneer. At a very early stage he has included electronics and processing in his music, e.g. with his long time companion Paul Lytton on Collective Calls (Urban) (Two Microphones) (Incus, 1972). His interest in sound processing led to the foundation of the Electro-Acoustic Ensemble in 1992, from their first album Towards the Margins (ECM, 1997) up to Hasselt (Psi, 2012), when the ensemble was expanded to 14 musicians (at their latest concerts there were even 18).

For Seven Parker has reduced the band members for his project drastically, and he has chosen musicians mainly working in the US (often based in New York) with whom he has had a history. With Evans and Pluta he played in Rocket Science, he released a great trio CD with Lee and Evans, worked in a duo with Ned Rothenberg, and his cooperation with George Lewis is history (From Saxophone and Trombone, Incus, 1980). He has even joined Ikue Mori on Near Nadir.

However, even fans of Parker sometimes have difficulties with his electronic excursions because they think that the part of “real” instruments, its warmth, the organic flow, and the authentic sound is underrepresented. But then again there is a perfect balance between the acoustic instruments and sound processing (Parker doesn’t like the term “electronics”) in his electro-acoustic ensembles because the processors manipulate and treat pre-recorded and live material – it’s rather a transformation of sound.

The music on Seven sounds as if you were in the middle of a huge and crowded insectarium, with bees, dragonflies, ants, bumblebees, spiders, butterflies and mosquitoes, all grotesquely amplified. The result is a whirlwind of fizzling, gabbling and buzzing – it’s a strange drone. There are ostinato parts, small solos are interspersed, even far eastern elements are integrated (Rothenberg’s shakuhachi), and Parker is able to use his trademark, circular breathing, in a very effective and natural way, so that it becomes a perfect part of the interaction, the density of sound, and the overall consistency.

Seven is beautiful noise par excellence, a marvelous piece of art, a successful communication, something you can get lost in endlessly. Just splendid.