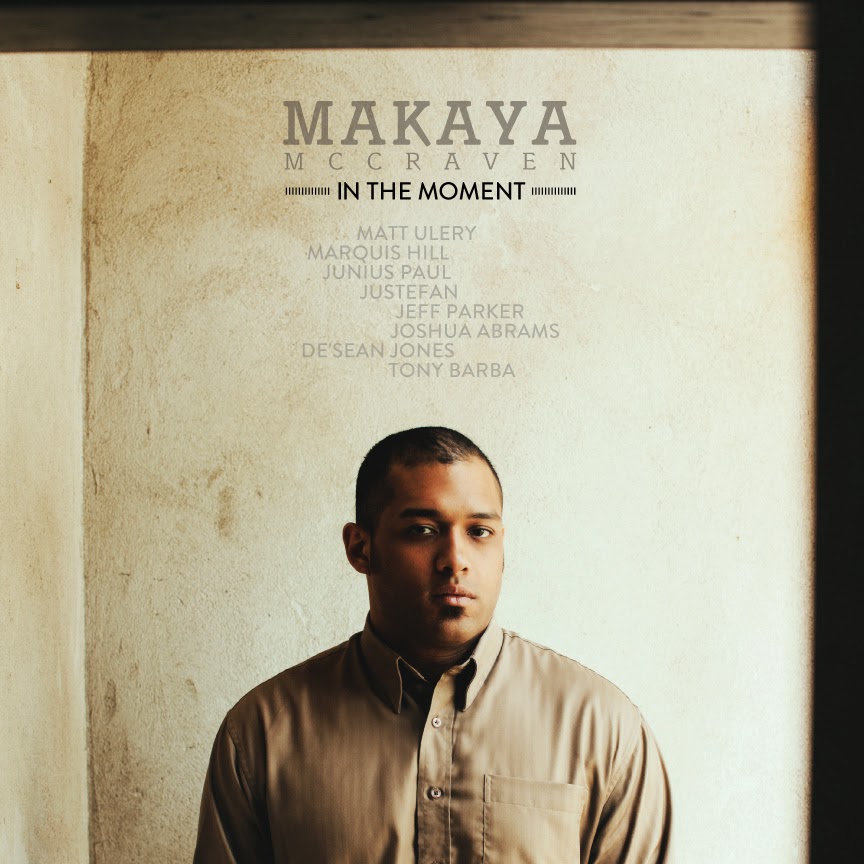 'In the Moment' is the third release from fledgling Chicago label International Anthem, the first two were differing incarnations of Rob Mazurek's 'Alternate Moon Cycles', and this third offering boasts contributions from Chicago stalwarts Joshua Abrams and Jeff Parker amongst others. An auspicious start. The material here is culled from a 12 month residency at Chicago's The Bedford featuring a revolving cast of some of Chicago's emerging and best known improvisers, the resultant 48 hours worth of recorded material was then edited down, remixed and reworked.

Whilst the name Makaya McCraven may be new to many, a drumming McCraven may well ring a few bells. Stephen McCraven, Makaya's father, has worked and recorded alongside the likes of Archie Shepp and Sam Rivers. The younger McCraven though, is very much his own man. In the same way as, say, Jack DeJohnette has absorbed and uploaded world musics into his approach, McCraven's playing is liberally peppered with Hip Hop inflections, with Jazz and Hip Hop comprising the base pairing central to the double helix of his musical DNA.

The album's tracks are either primarily groove oriented or based around repeated melodic figures. This is 'free improvisation' as initially coined in reference to post bebop musics, neither free of meter nor tonal centre but spontaneously composed around melodic or rhythmic kernels. 'First Thing First', which hails from early in the residency, is the only track which features no edits or reworking, and whilst embryonic compared to pieces later on the album, is a good early indicator of the musical approach, as well as providing a vantage point from which the amount of reworking can be observed. The post-production techniques both streamline the source material, and create more durable musical structure by subtly reinforcing sections with overdubs and looping certain phrases. Even the background bar chatter is worked into the mix, occasional exclamation from the crowd becoming another texture or looped rhythmic element. Here the relationship between Hip Hop and Jazz comes full circle, a musician informed by both using the production techniques of the former to build an new approach to the latter. The results suggest the Blue Note re-workings of Madlib's 'Shades of Blue', A Tribe Called Quest's beats, or an acoustic Isotope 217º. Fresh energy and ideas abound.

The variety of contributors, alongside the sustained level of quality of their contributions, ensures the approach which underpins the album never becomes tired. Whilst Abrams and Parker's are the two most recognisable names each musician holds his own, the changing combinations from week-to-week demonstrate a group who are sympathetic to the specifics of each aggregation whilst retaining their individual voices. Hailing from a city with a rich history of creating first rate post-Jazz musics, 'In the Moment' feels like both a rallying point and clarion call to those wanting to write its next chapter.

Available as DL/CD/2LP from here

Lp is sold out at source
i have some cds left

Sounds totally interesting. Thanks for the great review, Matthew.

I would have graded it a bit lower, though.

Many of these cuts come through like undercooked fragments and the album as a whole feels like a sampler to me. On the other hand, the latter part of the record seems tighter and the post-production shenanigans are particularly welcome since they present a pretty fresh approach and melding of styles.

Totally agree with Antonio. The album is nice but it really sounds as a compilation or a sampler...there's this constant feeling of incompleteness that really compromised my listening.