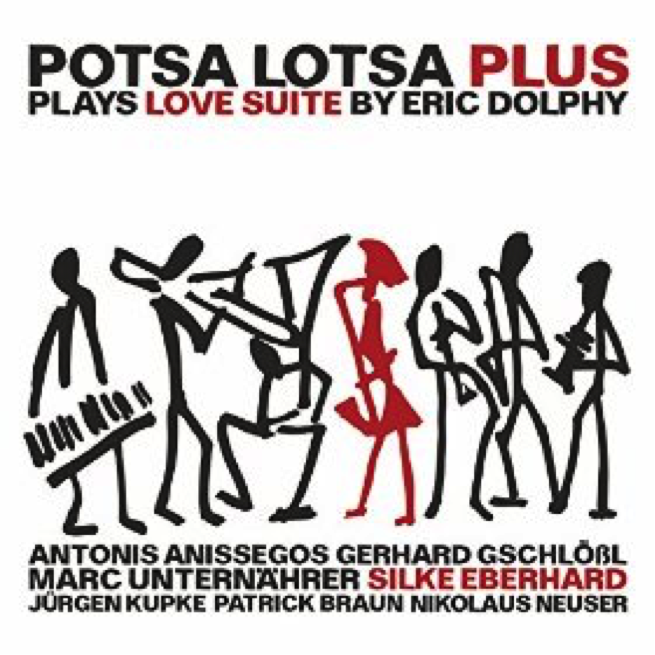 In 2011 German saxophonist Silke Eberhard spearheaded an ambitious 2-CD recording of all of Eric Dolphy’s released compositions.  Recorded by the group Potsa Lotsa (itself a reference to a Dolphy composition, “Number Eight,” on Live at the Five Spot), with Eberhard on alto, Patrick Braun on tenor, Gerhard Gschlößl on trombone, and Nikolaus Neuser on trumpet, this release was an impressive examination of Dolphy’s work, made in a spirit of devotion and homage but without falling into the trap of simply reproducing Dolphy.  The group offered a distinctive voice of its own, and Eberhard in particular showed herself quite adept at capturing Dolphy’s essence but at the same time pursuing an independent direction for her own playing.

For this recording, Potsa Lotsa has been enlarged a bit, with new additions Jürgen Kupke (clarinet), Marc Unternährer (tuba) and Antonis Anissegos (electronics).  The result is unquestionably a richer palette and range of expression, and the resulting performances are even more interesting and stimulating than those of the smaller group.  The album is somewhat misleadingly titled, given that only the first three of the ten tracks comprise Dolphy’s “Love Suite,” an unfinished composition Dolphy had yet to complete at the time of his death.  Nevertheless, it’s fair to say that the rest of the record is clearly inspired by Dolphy’s intriguing harmonic sensibility and idiosyncratic compositional structures, so the record as a whole does feel cohesive.

As for the group’s performance of “Love Suite,” it is exceptionally creative and effective.  Eberhard is featured on bass clarinet here, and as with the previous recording, she pulls off the remarkable feat of paying tribute to Dolphy while avoiding slavish imitation of him—something especially difficult to do insofar as Dolphy seemed to place his stamp on the bass clarinet more than on any other instrument.  What also gives the piece its unique flair is the work of Anissegos, whose interjections and subtle background work on electronics bring an unsettled and slightly jarring quality to the performance.  The piece itself is rather compelling, with layered harmonies and a subtle rhythmic bounce.  A terrific unaccompanied dialogue between Eberhard and Anissegos develops near the end of the first section and it reveals a sympathetic and nuanced rapport between the musicians.  The rest of the suite is just as good, with some fantastic group improvisation taking place in section two, and a chorale-like section three, again with effective contributions from Anissegos, adding just the right air of mystery that always seems to characterize Dolphy’s pieces.

The other tracks are very strong in their own right, with a good mix of composed and improvised elements.  Even without a rhythm section, a defined or implicit pulse propels each of them, often helped by Unternährer’s jaunty tuba playing (heard especially to good effect on “Miniatur”).  Anissegos even provides something akin to a slightly off-kilter drum machine to provide a rhythmic foundation for “Sketch No 1.”

Eberhard and her colleagues are to be commended for furthering Dolphy’s legacy, and doing so in a way that points forward rather than staying confined by tradition.  It’s an outstanding example of what a “tribute” album should seek to accomplish, and it does so resoundingly.