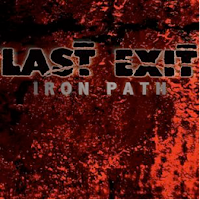 Iron Path is Last Exit’s only studio album and not only is it very different from their other (live) masterpieces like their debut Last Exit (Enemy, 1986) or Köln (ITM, 1990) but it is also completely different from almost all the other music at that time, which is why the listeners were confused. For rock aficionados there was too much free improv in it, for free jazz lovers there was too much prog rock. And even more than 25 years after the first release Iron Path is a mind-blowing, but strange album.

Last Exit has often been called a free jazz super group (with Sonny Sharrock on guitar, Peter Brötzmann on saxophones, Bill Laswell on bass and Ronald Shannon Jackson, on drums), yet this is not really correct. As a live act the band created a weird style mix of Sharrock’s harsh slide guitar rides, Laswell’s driving rock pulse, Jackson’s jungle grooves and Brötzmann just being the free jazz colossus we all love, which makes the music hard to categorize. If you had to pigeonhole it you might rather call it free rock. The sheer sonic brutality of their live shows only lurks below the surface on Iron Path, the slide guitar rides have been replaced by crude rock sounds á la King Crimson and Laswell’s bass is much more into industrial music and space funk/dub (listen to “The Fire Drum,” e.g.). Just Brötzmann seems to be defiant and unwilling to change, but his contributions are less prominent than on the live albums. Iron Path rather focuses on compositions, on real pieces, on dense and subtle preconceived textures. The chance to work with overdubs (as in “Sandpaper” with its multiple guitar tracks) offered new fields of tonal possibilities for the band. On the one hand this led to some weaker results like the cold reverb on the drums, which sound as if they were recorded in another room. On the other hand the band knocks out absolute highlights like “Prayer”, the first track, which presents a majestic, vertiginous, crystal clear Sharrock riff, while Jackson and Laswell drive Brötzmann in front of them, or “Eye for an Eye”, in which Brötzmann’s bass saxophone sets the tone for a satanic service – with the congregation consisting of die hard disciples like Sunn O))), Earth, Otomo Yoshihide and John Zorn.

Last Exit have been the blueprint for bands like The Thing, for all the music working at the interface of jazz and experimental rock, for all those who try to bring together Big Black, Motörhead and Albert Ayler. In his book “Stairway to Hell – The Best 500 Heavy Metal Albums” Chuck Eddy ranked it #268 saying that “Sonny's making wild electronic noise as if he's vacuuming up fur left over from the last Ice Age. The album ends with the drummer repeatedly booting you in the teeth with steel-tipped construction-worker shoes. This is “jazz”, by the way”. No matter what you might call it, but it’s still worth checking it out.