Thurston Moore and Mats Gustafsson Round Up: Day 2 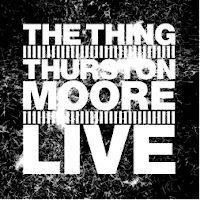 Many people speculate on what kind of music Jimi Hendrix would have played if he hadn’t died on September, 18 in 1970 at the age of 27 only. His last regular album, the live recording Band of Gypsys, was more open to jazz, funk, rhythm and blues and jam elements, maybe due to the fact that he had a different rhythm section (Billy Cox on bass instead of Noel Redding; Buddy Miles instead of Mitch Mitchell on drums). So, what kind of music might he have made? In my wildest dreams I can imagine Hendrix playing with all kind of creative improvisers like Joe McPhee, Pharoah Sanders, Archie Shepp, Ronald Shannon Jackson or Peter Brötzmann. Especially in the band of the last two musicians, Last Exit, he would have been a great alternative to Sonny Sharrock. What such a line up might have sounded like you can experience listening to The Thing and Thurston Moore.

The Thing (Mats Gustafsson on saxes, Ingebrigt Håker Flaten on bass and Paal Nilssen-Love on drums) have always been a blues/hardrock band in a jazz disguise, there have always been Led Zeppelin, Blue Cheer or White Stripes elements in their music (even if it is based on free jazz in general). And with Ex-Sonic-Youth guitarist Thurston Moore and Gustafsson’s and Håker Flaten ‘s decision to use only the baritone saxophone and the electric bass the rock/noise influence is even more obvious.

Live consists of two long tracks, “Blinded by Thought” and ”Awakened by you“, which both lead to spectacular riffs at the end of each piece – “Blinded  by Thought” flows into a monotonous monster rock riff while “Awakened by you” ends with a blues theme reminding of Willie Dixon’s “Hoochie Coochie Man”. Both endings are initiated and held together by Ingebrigt Håker Flaten’s bass guitar, so that especially Gustafsson can growl and cry and Moore can contribute a whole wall of noise texture. There is a real increase as to intensity and expressivity in both tracks as well, since they start in a rather meditative mood (the first one a dialogue between Mats and Moore, in the second one the whole band is involved with Gustafsson and Håker Flaten responsible for the melody).

Live is like a mad rodeo ride, with Paal Nilssen-Love as the horse which is bucking and bitching, and the others are like pyromaniac rough riders always setting new blazes. Hellish, exuberant, devastating, delusional – great!

Play it loud and feel free to headbang now and then. Still my favorite band!

The album is available as a CD and on vinyl.

You can buy it from the label (http://thethingrecords.com/).

Listen to it here:

And here are two live gigs: 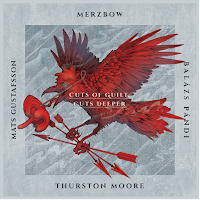 I tried not to review this album. Frankly. Most of all because sometimes I think that the blog over-covers (I admit I might be one of the most suspected about it) the production of some artists that supposedly don’t need anymore to be praised for their incontrovertible value.

We have here gathered a noise living legend, a ubiquitous (I mean this as a wish, Mats should be in schoolbooks!) saxophone ace and cultural firebrand, the guitar soldier that - you like it or not - has been among the few real sound-shapers of what we have listened in the last decades, and finally a young constantly growing drummer (no pressure on his shoulders). They do exactly what you may expect they do. Dangerous whistles, drillings, aural scratches, nitrites, trumpeting (I mean the one made by an elephant not by the notorious instrument - this must be specified), relentless hammerings, sweat, guitar swaths, the ignition of a rocket, whirlpools, condensation, slackening, whirling ascent and descent, fire cracks, strings and magnets tortures, noise shreds unravelling from a sound stream, a sound stream submerged by noise shreds, wounds, probably a couple of holes in the amps, maybe some corpses too. Without warning - and then with some disorientation for the listener - also some quiet moments opening and closing act three. Again and again. And again. Both for a too long and for a too short lapse of time. And they master all this hell as really few people can do. Rating this would be as rating the Pope for the way he celebrates Mass.

So, all in all, why should I not review this? I have just listened to it - undoubtedly and respectfully with in-earphones (I’m not a poseur guys!) - for the third time and I am noticeably confused and soberly happy.

Once in a while I went for the digital. The label provides also the HD FLAC 24bit/96kHz version, so that this maelstrom sounds particularly bright and analysable. All the other formats are also available.