The Austin-based, limited-edition, cassette-only label Astral Spirits was founded last year with the clear mission: to release avant-jazz and experimental from all over the world. The first releases sounded as taken from ad-hoc projects and challenged the audiophile listeners but more recent releases proved that this label may found its own niche, introducing music that does not subscribe to any conventions and is genre-blind. 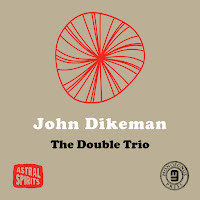 The three pieces feature The Double Trio in a dense and muscular interplay. Dikeman and Bishop articulate loose ideas, propelled by the hyperactive, restless rhythm section. The set begins with a massive blowout but later adapts a more searching tone that continues in the beginning of the second piece, “Apparitions”, where the nuanced, spare texture is patiently gains more power and volition. The last piece, the 23 “Wrong Record” begins with a dramatic, conflictual blows of Dikeman and Bishop, both employ extended breathing techniques, before the sextet joins and ups the fast, energetic interplay until the explosive, cathartic coda. 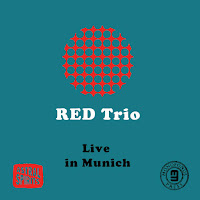 The set highlights the telepathic, restless interplay of this trio, cemented through five previous releases and collaborations with other experienced improvisers as the British sax player John Butcher and Swedish vibe player Mattias Ståhl. The trio is about to release soon another album, recorded four days later during the same tour with Polish sax player Gerard Lebik and trumpeter Piotr Damasiewicz.

The two free improvised pieces, “Munich 1” and “Munich 2” are both intense and fast. The interplay is totally democratic, enabling personal freedom and equal opportunities for all musicians to push deeper and forward, but never loses its collective focus. Even in such spontaneously improvised setting, the pieces sound as mature, rich compositions that blend organically between highly personal languages, dramatic tension building, subtle inquisitive sonic passage and minimalist, almost silent trio segments, especially on the second piece. 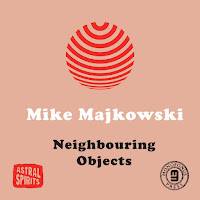 The three continuous piece on the first side, “Chandelier/Gondola/Echoing Stars”, and the one on the second side “Carnival of Decay”, stress a highly disciplined, patient and minimalist approach. The tension is structured methodically through accumulating, repetitive layers of resonant overtones, impressive command of extended bow techniques and intense focus but with no attempt to reach a cathartic release. It is all about the sound, a rich, nuanced one, as if time stands still, while the listener is encompassed with disturbing, dark waves of higher and higher resonant sounds. There is no real escape from the masse of sounds but there are some distant rays of hope in the coda of the “Carnival of Decay”. 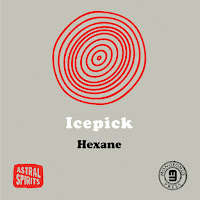 Icepick is the short-lived power trio of American trumpeter Nate Wooley and drummer Chris Corsano - who collaborated before on Wooley’s song cycle Seven Storey Mountain - and Norwegian, Austin-based double bass player Ingebrigt Håker-Flaten, known from another power trio, The Thing, the modern jazz quintet Atomic and his own The Young Mothers. Hexane was recorded live at the Shapeshifter Lab in Brooklyn in November 2013. Writer Clifford Allen suggests in the liner notes that the trio name describes its aesthetic - headed toward incision, like a workman carving of structure out of a sonic block.

This live recording stress the urgent spirit of powerful free improvisations. The first piece, “Pentane”, begins with a searching tone and a fractured, chaotic pulse, but almost immediately form a muscular interplay. Wooley plays in an excited, energetic bursts, while Corsano solidifies the driving-swinging rhythm and Flaten the low-end sonic spectrum.  The second piece, “Heptane”, explodes in its very beginning but turn soon into a much more contemplative and loose improvisation, where all three musicians search and experiment with the sonic envelope of the trio, and only Flaten attempts to anchor this improvisation in a cohesive structure. Towards its coda the trio settle again on a cathartic, rhythmic interplay. The constant chatter of the audience is quite audible on this piece and disturbs this sensitive sonic experience. 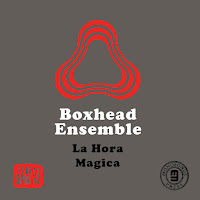 Michael Krassner, the founder of the musical collective Boxhead Ensemble likes to veil its projects in mystery. There is no available information about this project except that it was recorded in Arizona and the Ensemble ever-rotating line-up feature now Wil Hendricks (the founder of  the defunct The Lofty Pillars, with Krassner), guitarist Adam Busch and violinist Laraine Kaizer.

During its more than twenty years of existence and constant incarnations the Boxhead Ensemble was used by Krassner as a platform for creating original soundtrack for independent and documentary films. This mysterious project keeps the same cinematic vein. 'La hora mágica' is a phrase in Spanish that describes the magical time of the day that captures the few minutes between sunset and full darkness, often used to to describe certain qualities of light by photographers. The 14 concise, meditative pieces sketch vivid, cinematic soundscapes played by processed, effects-laden guitars, minimalist keyboards and atmospheric violin. A perfect soundtrack for film that may document a year-long life cycles in some distant, virgin and icy nature. 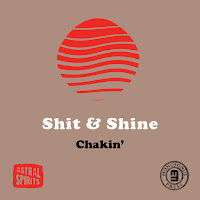 The psychedelic spoken word opening piece with Simonelli justifies alone the purchasing this release. It has a smoky, film-noir ambiance, colored with a repetitive, funky pulse that encompasses Simonelli tired, indifferent yet charismatic delivery of the story. Simonelli’s distorted and manipulated voice serves later on as a leading instrument in the atmospheric “Jump on the Feeder”. The remaining six short “TJC” pieces are collected from the outfit Tuesday Jazz Chat youtube series, overdubbed for this release. All the “TJC” pieces are rooted in a fusionist-funky rhythmic interplay that stresses the dialogue of the vintage electric pianos. 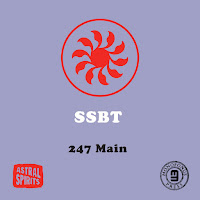 The trio third cassette release feature two pieces that were recorded live during the trio 2014 tour, in Seattle and Portland. “Pockets” is a free-form, chaotic, noisy and intense free-improvisation in which the trio dense, collective sound blurs the distinctions between the percussion, effects-laden, distorted sounding guitars and weird tapes and electronics textures. “Cook Problems” is a spare, enigmatic piece that emphasizes individual minimalist sonic explorations, slowly accumulating to a strange cinematic narrative that is cut off abruptly.

can i buy the tapes anywhere in europe? possibly germany?

time to dig the cassette deck out of the cupboard?

I do hope that this music will be made available as a download. I've yet to read a convincing argument for superior sound quality on cassette, and if the release of music on such a limited medium is not based on sound quality, then what? Apparently, the cassette comes with a digital download code!

No, I'm not interested in digging out my old cassette player.

Colin - the most cursory of online searches reveals that digital copies are available separately elsewhere. The format debate is tired, has been had at length elsewhere on the blog (& many others), and ultimately detracts from a discussion about the music. ALL formats have their limitations, what we should be doing is championing this great music, however it makes its way to or ears/hearts/minds.

Thanks to Astral Spirits, keep up the excellent work!

All the older OOP releases are available there. The newer releases (which aren't OOP yet) will be available at the store digitally shortly, but for now you can always buy just the digital (for every single Astral Spirits release) from ITunes, Boomkat, Midheaven, Amazon, etc. on the day they are released, just the same as any CD or LP release. And yes, all the cassettes come with a digital download card.

there really isn't an argument for superior sound quality on cassette...

Releasing this music in a limited medium iss mostly based on trying to reach a different audience that wouldn't necessarily be interested in this type of music. Free jazz/improv/etc is very alive and thriving right now and it shouldn't be held up on a pedestal for those with "higher" tastes...I believe that young kids, punk rock folks, etc can get into this music and appreciate it for what it is. And the only way that this music will continue to survive is if folks like that find this stuff and get into it. It's also a much cheaper price point so the hope would be that someone is more willing to take a chance on a $7 tape and check it out rather than shelling out $15-25 for a CD/LP.

Regardless, I hope that EVERYONE enjoys these releases regardless of what format it is in, I think they are all quite stellar.