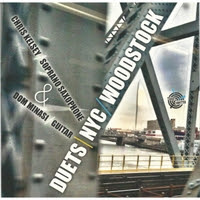 I recently covered a duo recording of guitarist Dom Minasi paired with saxophonist Blaise Siwula. Last year, I wrote about one with pianist Michael Jefry Stevens, and another with Hans Tammen. The duo format seems to be one that Minasi enjoys, and for that I'm greatful, as his latest with soprano sax player Chris Kelsey, Duets NYC/Woodstock, is an absolute joy of an album.

I was unfamiliar with Kelsey's playing but am hooked now. The duo locks into strong grooves that rely on implicit pulses - and how they move! There are a great deal of rapid fire runs, but they are balanced against an equal amount of reflective moments.

The opener 'Fondness & Trepidation' both sports a fun title and a wealth of musical ideas. I would say that fondness is the operative work and trepidation just a bit of self-effacing humor as the duo shows great compatibility from the get go. Minasi strums, plucks and picks, and you can sense the camaraderie after Kelsey's first few notes. Speaking of which, there are many, as his melodic lines rise and fall with vim and vigor.

The two standout tracks are 'Rod Serling' and 'Say What', which come towards the middle and end of the album. The former starts with Minasi offering a melody and Kelsey reacting with a repetitive motif, gaining in speed and ferocity until reaching a breaking point, and beginning again. The latter features Kelsey's elliptical and syncopated melody against the fierce comping that Minasi uses to deftly manipulate the direction of the musical conversation.

If you only get one Dom Minasi duo album this year, get this one, and then while you're at it, pick up the others.
Paul on Friday, June 26, 2015
Share