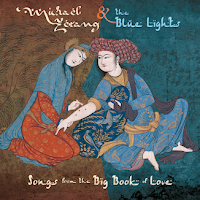 Jim Jarmusch’s “Only Lovers Left Alive” is a great movie. It celebrates a certain vintage lifestyle, in which quality, deliberate slowness, and a love for nostalgia and the luxurious fight against the inevitability of greed and the fast pace of today’s world. However, there is only one weak scene: At the end of the film the two vampires Adam (Tom Hiddleston) and Eve (Tilda Swinton) are in Tanger and pass by a club in which the Lebanese singer Yasmine Hamdan is playing and the two protagonists get lost in the music. In this scene I wished Jarmusch had chosen a more interesting band instead of Hamdan’s rather insipid electro/world-music brew.

A great choice would have been Michael Zerang & The Blue Lights because their music reminds of the lost Tanger of William S. Burroughs and Paul Bowles, of the beat generation, hot jazz clubs, hard bop excesses, an exuberant life style and an atmosphere of anything goes. As a band leader percussionist Zerang, the son of Assyrian parents, is clearly in the tradition of Art Blakey and his Jazz Messengers but he also cultivates his Eastern roots. The debut album of his band The Blue Lights includes eight original compositions by him and features the band playing a local club date in Chicago. And they set the house ablaze, no wonder considering that he has gathered Chicago’s top notch players like Mars Williams (sax), Dave Rempis (sax), Josh Berman (cornet) and Kent Kessler (b).

However, the fact that a great deal of the music is notated, does not mean that there is no room for improvisation although you might argue that the old theme/solo/theme/solo pattern is really worn out. But it’s just the opposite! Oriental riffs are used as a foundation to go completely astray (the saxes in “Persian Lips”), fanfare-like tunes meet urban funkiness (“Dancing for Cigarette”) and crazy over-blown sax solos (“To Tu”), syncopated cadences clash into Eastern melodies, free jazz excursions and call-and-response schemes (“Chicago Rub Down”). The brass section is a killer – especially Rempis and Williams kick asses - , Kent Kessler is solid as a rock, and Zerang‘s super-tight, earthy and relaxed strikes, his manic drum rolls, and Middle Eastern grooves keep the diverging elements together. Even the ballad (“I don’t know if you are beautiful tonight”) is so full of warmth you cannot resist. Hardly ever did I have such continuous fun listening to an album.

You can order and listen to it here:

It is strange you don't mention "Michael Zerang & The Blue Lights - Hash Eaters & Peacekeepers", released simultaneously, because it is really the other side of the same coin.

The simple reason why I did that was that I don't have the album, Mulot. But Stef helped me out - as you could see :-).