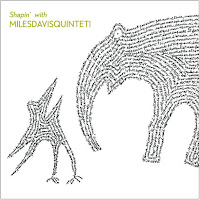 We've heard great piano trios, and then you have exceptional trios, and this one is among the latter, with Xavier Camarasa on piano and piano-percussion, Valentin Ceccaldi on cello, and Sylvain Darrifourcq on percussion and zither. After the real albums by the Miles Davis Quintet in the late fifties and early sixties (Cookin', Steamin', Relaxin', Workin', Walkin'), we now have this trio which calls itself "Milesdavisquintet" to produce the limited edition album "Shapin'".

Maybe their ambition is high, to change the shape of jazz like Davis did sixty years ago, and to be frank, in a way they do, reducing the music to sheer sonic dynamics of timbral changes, intensity, density, volume. The role of the individual instruments almost becomes irrelevant in this context, as any instrument can produce any sound and is at the same time melodic and percussive. Despite the limited line-up, and despite the fact that the piano and the cello rarely sound like a piano and a cello, the end result is absolutely fascinating, bringing a fantastic journey that is hypnotic and builds up like a sonic tsunami on the first track, and a more contemplative yet equally intense second track.


Listen and buy from Bandcamp. CD available in 200 copies.


I can also highly recommend the band's explanation of what jazz actually means, presented by drummer Sylvain Darrifourcq, and how it differs from other music. If you don't understand French, be aware that the subtitles do not correspond to the explanation, yet they are equally instructive.

I think this is the 1st time I've ever wanted to speak french :)