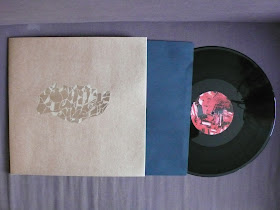 This is one of those very special records, although this may be a 4.5 star review, there's no doubt it's a five star listen. This is a record that crosses many boundaries and certainly guaranteed to make you not only sit up and listen but also rock around the room (if played loud enough). GOING a Belgian based group, has a skeletal line up which packs a big punch, 2 drummers, Joao Lobo and Mathieu Calleja, and 2 keyboards/synths/objects (and plenty of effects) are Giovanni Di Domenico and Pak Yan Lau. The sound that they come up with could be loosely post-rock, but also closely allied to improvised music (sound wise). To top that off they have a description on their website describing themselves as a "[..] psychedelic groove band".

The album consists of two beautifully organised pieces. The first side/track "Red Machinery" develops slowly from sparse drums and keyboard sounds into repetitive figures and a complex interlocking groove. The combinations of rhythmic patterns are at the heart of this composition, the melodic seed is simple but varies slightly to blend into (and with) the various patterns. You could 'think' of Chicago group 'Tortoise' for a reference, GOING tap into the same area, overlapping rhythms and rock beats, mixing some great experimental sounds and repetitive riffs, its a delightful combination and very addictive!

The second piece "Blue Machinery", has a slightly harder edge. Its brooding atmosphere and constant recurring single note pattern give this a urgent edgy quality. One feels the piece may brake, at any moment, into a up-tempo groove, but the group hold the music back in a way to produce tension. Minimal solo lines give the track just the right balance between a groove and melody, allowing the music to evolve naturally.

The clever combination of two keyboards/effects and two drummers really gives the music plenty of space, and the lack of a bass to drive the group is actually what gives it the group its pure sound. There are plenty of details to hear within the recording due to this combination and the different paths taken by each instrumentalist. There are no real soloists, just co-operative group made music.

This is a vinyl release, with one track per side, although it's possible to buy a digital version. I received the music on sound-files and I have to say that it seemed (in my humble opinion) a great medium to host this excellent music, as I found myself listening to the two tracks as one long evolving piece.

This is certainly a highly recommended release, and easily accessible to many people interested in either jazz, rock, electronica and the minimalism of post Steve Reich's world. Anyone interested should quickly head over to their website as this is a limited edition of 300 odd copies.

A short guide to formatting when writing about music:

Hi Anonymous, thanks for your kind remarks. Yes, its true I should (could) have used "-" in "Red Machinery", sloppy proof-reading on my part - I didn't have the track titles to start with, which meant I'd written some things in italics. In the meanwhile, I hope you enjoyed the album, or maybe you haven't heard it.

Thanks again for your help, of course (anyone reading) don't hesitate to consult the ultimate guide - as used by universities (mine included).

p.s. I forgot to add that the group refer to themselves as GOING, I'm not sure why, but I'm sure they do.

Although I observe the first two, I don't put tsong titles in quotation marks - for the simple reason I'm not quoting the words, but using them. If I quote something, I use quotation marks. I know this is contrary to current conventions, but I don't understand why song titles and album names should be treated differently.

As the unofficial site censor, to assist reviewers in the future, perhaps you could provide a complete list of what is permitted and what is verboten. A modest proposal, I'm sure you'll agree.

Thanks for the review Joe. I hadn't heard of Going before, but love the album after streaming it elsewhere.
Have now ordered the vinyl version.

Hi Chris, thanks, I hope you enjoy the album. The group is just recording a new album this week, so I look forward to hearing that one soon. There's also their first album which I must confess I don't know, although I think we reviewed it here awhile back.