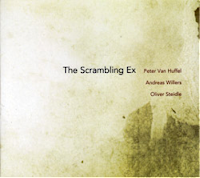 A trio recording with some serious power and force, The Scrambling Ex represents the latest project of alto saxophonist/clarinetist Peter Van Huffel, who is joined here with guitarist Andreas Willers and drummer Oliver Steidle.  Van Huffel will be familiar to many readers of this blog, due mainly to his jazz-rock Gorilla Mask records and last year’s Boom Crane, an outstanding trio release (with Michael Bates and Jeff Davis) that I included in my top-10 list for 2014. Willers and Steidle have made names for themselves in the European scene (particularly Germany, where Van Huffel now also resides); both are known for their adventurous spirit and being eager to work within rock-influenced idioms.
For instance, Willers headed up a Hendrix tribute album in 1995 (Andreas Willers and Friends Play Jimi Hendrix Experience) and Steidle’s group “Die Dicken Finger” draws from his early roots in rock music to inform his free-jazz performances.  With their respective backgrounds in view, it’s not surprising that this record works in a similar vein: a good deal of skillful improvisation, but usually with a tightly-structured rhythmic framework and a driving beat.

One thing that is immediately noticeable is that this really is a group record.  All three musicians play central roles, with Willers’s skronky guitar and Steidle’s whip-smart, punchy drumming being essential to the visceral impact of the record’s best tracks.  “Case of Need,” the second cut, is a blistering four and a half minutes of the kind of thing Van Huffel has become widely noted for: an intricate, odd-meter melodic foundation upon which the group can offer collective and individual commentary.  Although there are a couple of tracks with a quieter approach—such as “Happenstance,” a languid, mysterious exploration of long tones, featuring Van Huffel on clarinet—the group is truly in its element when it’s time to take the gloves off and rock out.  “Tangent,” track number five, has Steidle sounding a good deal like Jim Black in his precise, laser-focused use of snare and bass drum to push the group forward while Willers and Van Huffel unfold and expand upon the track’s rapid-fire melodic pattern.  Willers is particularly good at shifting roles: when a rhythmic foundation is needed he can provide one with effective power chords, but he can also take the lead with knotty flurries of notes, sometimes with some well-chosen overdubbing and fuzzed-out effects (see track #6, “Adventures in Nalepaland”).  And Van Huffel is similarly chameleon-like, as he can be both subtle and sensitive (especially in his work on clarinet – see track #8, “Sonic Finder”) or fiery and relentless (#1, “Beast”; #9, “Flegenfoet”).  Although the record isn’t exceptionally long, with nine tracks and around 45 minutes of music, each song has its own identity, and there’s a lot worth exploring with multiple listens.

All in all, a well-conceived and satisfying release, and of particular interest to those seeking a good dose of hard-hitting rock to go with their free jazz.