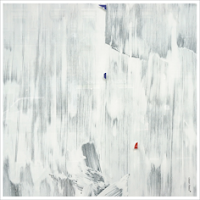 When I saw Baloni at Munich’s Offene Ohren (German for “Open Ears”) jazz club in April this year I was surprised by the development the trio has made. I had seen them two years before and thought that they were a good but not an excellent formation. But in the meantime they have become extraordinary, especially due to the facts that they seem to know each other even better, that they listen to each other very closely so that they are obviously able to react, and that they have a desire to risk something with their music. The musicianship has always been excellent, their improvising is a natural flow and the various timbre explorations are really gripping. And like the various timbres the musicians come from various European countries: Belgian reedist Joachim Badenhorst, French-Japanese violist Frantz Loriot and German-French bassist Pascal Niggenkemper met in New York and started their project in order to explore the wide field of the classical contemporary format and the driving force of improvisation.

From the start their albums were fascinating, Fremdenzimmer and Belleke were discussed very friendly on this blog, and Ripples is even raising the bar. In general their style is infused with Baroque and modern classical music as well as the sound of jazz pioneers like Jimmy Giuffre or Joëlle Léandre. Based on these influences they have created something unique. There are enormous contrasts in dynamics, emotions and sound, on the one hand the instruments literally seem to surpass each other in furiousness and on the other hand they present moments of incredible privacy (Badenhorst and Loriot at the end of “De Rimpelingen Des Levens” (The Ripples of Life)). The music swells and ebbs – actually the album rather sounds like “waves” instead of “ripples”.

Like on his extraordinary solo album Look With Thine Ears Niggenkemper adds his very own sound to the trio, using different material he puts between the strings his bass reminds of a didgeridoo or a percussion instrument, for example in “Grüne Welle” (Green Wave). Then again he switches to long bowed notes which go along with Loriot’s viola very nicely, while Badenhorst’s bass clarinet provides dark sounds. In “De Rimpelingen Des Levens” , the final and most exciting track of the album, Badenhorst’s tenor starts with clicking sounds before he turns to almost cool-jazz-like melodies in front of the typical textures Niggenkemper and Loriot display. Then the track squirms in agony and especially the last part reminds of György Ligeti’s “Atmosphères”.

Ripples was recorded live at Exploratorium, Berlin on April 11th, 2013, it is a wonderful chamber jazz recording and another proof for the marvelous output Clean Feed has had this year. As many very good albums it becomes more interesting the more often you listen to it.

Ripples is available on vinyl only.

You can buy it from the label.

I love such bands, music, Clean Feed label (particularly its 'stock off' period :) ) etc etc but this "only vinyl" note is a real frustration for me. Why do they limit themselves?

Well, most improvising musicians pay their own money to get their work published, and don't get much in return. That's why.

I'm not sure that's really an answer to the question asked. Are you suggesting that the musicians paid Clean Feed and that it was the musicians who decided on a vinyl only release because they didn't have enough money for a CD too? None of that sounds right to me.

While this certainly doesn´t feel right, that´s the way it works in many cases. I would be surprised if it wasn´t the case with Clean Feed, considering the number of albums they release every year. CDs have been pretty much a dead format since years. It is truly a miracle that many people still put them out. Vinyl at least retains some niche appeal that CDs don´t. As a musician (unless you are a "star"), why waste money on them too if they hardly sell anymore.

Pascal Niggenkemper said that it was their decision to release the album as vinyl only. The length of the tracks was perfect and they simply like vinyl.
I don't agree that CDs are a dead format, especially in jazz most of the releases are CDs, vinyl was rock bottom and has now been recovering, that's all. That's not my personal opinion, it's based on what people who work in stores or who own stores have told me. Some musicians love vinyl (like Mats Gustafson), others say that they are perfectly happy with CDs (Evan Parker, e.g.). Another argument is that CDs are easier to carry than LPs and in this genre the musicians sell a lot at concerts.
Also, as far as I know, musicians don't pay labels to release their stuff. I talked to a lot of them, no one said that. NoBusiness, for example, buys the tapes from the musicians, so the musicians pay for the recording process in advance. In this genre this is quite common.
Finally, producing CDs is much cheaper than LPs. That's why LPs are more expensive for the buyers.

Just to clarify, a lot of labels charge musicians for the costs of making CDs and/or vinyl. Some labels charge some artists but not others (ie if they are more confident about sales of certain artists). This is definitely the case - I'd rather do this anonymously, but I am a musician who has been reviewed several times on this blog. Clean Feed ask some artists for money, not others. Leo charge a massive amount, way more than costs. Creative Sources ask artists to cover costs. FMR roughly 50% of costs. Not all labels do - Martin is right in saying that No Business don't for example, neither do Emanem, Intakt, and many others. But there is very little money to be made in this music, and if they don't have funding the labels are struggling as well as the musicians....

Indeed there is no money to be made in this business. I remember the joke often told between musicians, what is the most unheard phrase in a musicians language? Answer: "Isn't that the banjo player's Porche outside?"

A fairly typical scheme is when musicians agree to buy part of the press run in advance. They can then sell these CDs at gigs and recover their investment. But the thing is the CDs are increasingly difficult to sell these days, and even though they may be cheaper per unit, you can't press just a few, it has to be a few hundred.

Hi Anon, thanks for your comments.

I indeed also have the same problem, however, it is possible to make smaller runs of products. If you don't already know them take a look (as an example) at the Loop Collective and their mini loop series. There have also been a few smaller companies, and plenty of enterprising individuals producing 'burnt' cds, which is a nice way around the problem, and gives a personal touch to the music.

I also think that using Bandcamp or Soundcloud to get your music to the public does a fine job. I know a few excellent artists that distribute their music via Bandcamp in various formats (which I'm sure you're aware), from 0€ to XX€.

Unfortunately, reviewing albums - since a long time - means that I have to sadly say that albums are now so abundant that they no longer indicate quality music or musicianship, which I think starts to reflect in sales (maybe?).

Thanks for all the answers and comments that Ive just noticed. Left collecting LPs in the beginning of 90s and begun to buy CDs at that period till today. Now I'm only purchasing CDs, mostly through websites of record companies and amazon. Another selling point is a second hand store in Istanbul. Maybe I would turn back to vinyls if such "only vinyl" samples increase.

Yes, carrying CDs is much easier especially for the guys like me who listen their "daily" selections at their workplace with earphones while working :)

Interestingly Baba I notice vinyl prices have gone up, as if by magic!