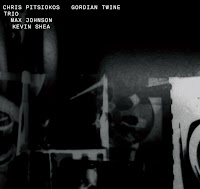 A Gordian knot is an impossible problem—something hopelessly tangled and complex, unlikely to ever be unraveled. It’s a common metaphor, but before any music is heard, Chris Pitsiokos, Max Johnson, and Kevin Shea have already slyly changed its terms: Gordian Twine suggests not attempting to undo such a knot, but instead wielding the material to create one.

Gordian Twine is Pitsiokos’s first album as a leader. It’s a good proxy for Pitsiokos himself: a brash, youthful jolt that captures the current moment in NYC, both in personnel and attitude. Pitsiokos, a saxophonist with a chattery, Braxtonesqe playing style, has quickly been making a name for himself in the improv scene. Much like bandmate Max Johnson, he’s a young dynamo who is down to play with just about anybody, any time.

Pitsiokos says the trio is a vehicle for the gamut of his musical experimentation, and a bewildering array is unpacked over Gordian Twine’s thirty minute runtime: free improvisation, through-composed works, even graphic scores. This mixture, heavily weighted toward improvisation, fairly lives up to a Gordian ideal: the threads of each musician truly entangle into something that could never be separated back into individual strands.

A nervous energy infuses tracks such as “Clotho” (some tracks are named after the Three Fates of Greek mythology, which adds another layer of intrigue to the idea of “Gordian twine”). This isn’t to say the music is unsure. Instead, it feels always ready to burst at the seams, barely able to stick to the charts, so full of vitality and fire that it risks discharging in all directions at once. “Atropos” showcases some impressive circular breathing, while “Lachesis,” a sax and bass duo, finds its strengths in melody and pacing. Johnson, as always, is in top form; the man seems able to consistently, interestingly respond to any musical situation he’s plunked into. Shea’s drumming is aggressive without being overbearing, the sticks never lingering long enough in any one spot. Together, they sound ebullient, restless, a little deranged.

Gordian Twine is a great jump-start, brief as it is. It has that searching, unsatisfied mien that glimmers within all great improvisation. The formidable work ethic of all three members guarantees it won’t be the last we’ll hear from them, and gig by gig, album by album, these guys are only getting better.

Listen and order on Bandcamp: