A Free Jazz Blog experiment ... concert reviews! Colin Green leads off the effort with a review of Konstrukt's show in Manchester, England, this past Wednesday evening.
Let us know what you think about this venture. 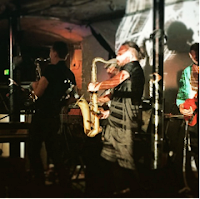 Konstrukt have been touring Europe, including Venice (where they recorded themselves as a double quartet – sounds interesting) Berlin (where they were joined by William Parker, who was apparently dancing) and London’s Cafe OTO (with Alexander Hawkins (piano)). Two days later, they played at Islington Mill in Manchester, a converted industrial mill that serves as an exhibition and performing space and houses creative artists in a variety of media, some of whom joined Konstrukt for their second set, along with local musicians.

Konstrukt have a recently released album: Kaish: Live At Kargart (Holidays Records, 2015) a performance with Akira Sakata from this January (recommended). Since that recording, the line-up has changed, with a new rhythm section, and they now consist of Umut Çağlar (keyboards, electric guitar, woodwinds, reeds); Korhan Futacı (tenor and alto saxophones, voice, percussion); Barlos Tan Özemek (electric bass); and Berke Can Özcan (drums). The new members – the electric bass, in particular – have given Konstrukt a more hard-edged, muscular sound. There’s still the same flexibility as before: lines and patterns swerving in multiple directions, but with a better internal balance and no danger that the front-men will obscure the often dislocated rhythms behind them. The music is less diffuse, but has gained in clarity. Part of Konstrukt’s appeal is the sense that their music occupies several different spaces at the same time, areas that are now more sharply defined. As before, their music can teeter on the edge – a feeling of heightened spontaneity – and the first set closed with a gloriously chaotic up-tempo thrash.

For the second set, Konstrukt were joined by local musicians Graham Massey (B-flat and alto clarinets, electric guitar) and David McLean (Fender Rhodes and tenor sax) together with Sam Weaver (modular synth) who is enjoying a residency at Islington Mill (although unfortunately, he had to retire early due to technical problems). In addition, we had Rachel Goodyear, who provided “live drawing” projected onto the stage, using graphic images, wet ink and fabrics, all of which provided for a novel and busy second set. The combination of an electric-Miles sound of swirling piano, alto clarinet, echo-effects and drones, spurred on by propulsive bass and drums – and with projected images on top – made it feel like the early Seventies (though I suspect I was the only member of the audience who could remember multi-media performances from that far back).

The open-ended nature of Konstrukt’s music lends itself to the guest appearances of which they’re so fond. There’s plenty of space left for others to make their mark. There was some nice double saxophone work from Futacı and McClean, rising to a fever-pitch, and towards the end we had unison horns playing Stax-soul riffs over a blues-rock base – stirring stuff. There’s nothing like live music. 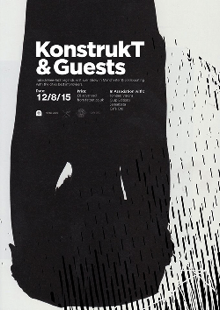 Mark says.....
Live reviews? Why not indeed. This is good review of a very good band.
I saw the Cafe Oto gig which was frankly astounding. As a unit Konstrukt seem to have defined a signature approach and sound which readily admits collaboration whilst maintaining the group's very strong identity. Very forceful and strong music threaded with moments of reflection. Would've loved to hear them with Massey

I like this idea. Albums in this genre are often live recordings from a couple years back; the band might sound very different if you go see them live. Case in point: Nilssen-Love & Vandermark. Extended Duos is from 2012-2014, and I wonder what they sound like on road now.

Alex says ...
I like the idea a lot. Some gigs (and collaborations) will never be documented and that's a nice possibility to read something about it. It's also a good way to come across new venues, organizers etc. Maybe you could even include a new tab. The problem might be that the reviews should be relatively close to the actual event, so that puts you a bit under pressure. In general, thanks for the great job you're doing.

There's some excellent footage of the new line-up with some other collaborators (they look familiar) here:

I just like your the music is less diffuse, but has gained in clarity. Part of Konstrukt’s appeal is the sense that their music occupies several different spaces at the same time, areas that are now more sharply defined.

I always liked Konstrukt records, but my point now is: can they still sound great when they are not augmented live by any free jazz legend? I've seen them in Rome on late July and the whole result - I mean the 4 members alone - have been rather disappointing...

Your music is less diffuse, nevertheless has gained in clarity. Part of Konstrukt’s appeal will be the sense that their music occupies several different spaces as well, areas that are now additional sharply defined.

I like this thought. Records in this genre are normally live records from a couple years back; if you go see them live the group might seem quite different.

Konstrukt have a recently published record: Kaish: Live At Kargart (Holidays Records, 2015) a performance with Akira Sakata from this January (advocated).