Here's a take on what happened at New Revolution Arts* in Brooklyn last weekend, where Boston's Leap of Faith and NYC's Steve Swell brought their unique sounds to an intimate and appreciative audience. 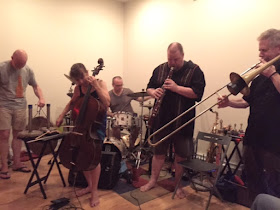 Leap of Faith does not travel light, and if you have a chance to see them perform, you are in for an multi-sensory experience. From the incredibly detailed discography and many CD's available at the well stocked merch table to the rich visual spectacle of instruments festooning the playing area, this is a group that comes prepared.

The show begins with the start of a timer - a large digital clock that counts up for the next 40 minutes, indicating the length of each of the three sets of the evening. The concert then follows this pattern: a guest artist opens, then Leap of Faith plays, and finally, the two groups combined play. It is within all of this set-up and structure that the planning gives way to the pure improvised music (and some unusual sounds) that pours forth.

On this night, trombonist Steve Swell opened with two reflective solo pieces. Abstract and quiet at first, both improvisations unfolded to the ticking of an internal metronome. Towards the end of the first piece, Swell locked into a pattern that the audience responded to with satisfied and knowing smiles.

Next up, the Leap of Faith quartet worked thorough a constant flow of ideas, a spectrum of sound that toyed with consonance and dissonance. Comprised of woodwind players David Peck (PEK) and Steve Norton, cellist Glynnis Lomon, and percussionist Yuri Zbitnov, the group acted as a unit, creating a unique sonic world of textures and combinations of timbers and sonorities.  The two woodwinds, sometimes butting up against each other, other times in complete agreement, kept things flowing, while the cello was often a focal point. One particularly effective passage occurred when both Norton and Peck reached for their Eb contra-alto clarinets and created a lush sonic bed for Lomon's dissonant double stops. The set was one long improvisation, with a series of climaxes, and ultimately an extended percussion solo passage brought the whole event to fulmination.

The evening's final set, with Swell joining the group, took on its own character, and though the trombonist was very much an ensemble player, his impact was palpable. The joint set didn't quite reach the volume or density of the previous one, rather, the group stayed in a more melodic mode and broke out some tiny instruments - recorders and wood flutes - towards the end.

To me, the show was a visual event as much as an aural experience. The improvisation goes beyond what notes and rhythms they play, and to what to will they make them with. PEK and Norton are constantly changing instruments, and both percussive and vocal 'events' seem to bubble up throughout. Anticipating and watching what comes next is an event itself from which you can hardly avert your gaze.

This was a show that was as perplexing and challenging as I hoped it would be. I must admit I found the vocalizations, which seem to spontaneously occur and signal a shift in the groups energy, to be a bit hair-raising, but that goes part and parcel with the memorable sights of PEK playing exotic horns or blowing into three slide whistles simultaneous; or Zbitnov playing cymbals strung up on rope.

If you're looking for sonic adventure, if you're looking for something you didn't know you needed, and if you think you're ready, then yeah, take the leap of faith. This genuinely nice group of musicians transform into something completely otherworldly as they start digging into the dozens of instruments that festoon the stage.

Leap of Faith's Bandcamp page is well stocked. Within three days of the concert, the event was packaged up and ready for download. From this show, 'disc 1' one is called Factorization (LoF w/Steve Swell and Swell solo) and the second is Reimann Surfaces (featuring Leap of Faith's set).

Thanks Paul for your wonderful words about our performance!

Also check out the concert from the following night at Downtown Music Gallery at
https://leapoffaith1.bandcamp.com/album/solution-concepts

Send me email at Sparkles@GiantEvilClown.com if you would like to receive my periodic email newsletter containing New Releases announcements, Concert Announcements and general news regarding Evil Clown artists...

I forgot to mention that the wonderful cornetist Thomas Heberer joined us at the Downtown Music Gallery performance.

The recording contains the LOF set, 4 short pieces from Thomas' fabulous solo set and a LOF/TH set to conclude.

Thanks to Bruce Lee Gallanter for having us to his shop and introducing us to Thomas!

Great review Paul. Very informative. And it may be that because there is often an album to mention as well, we aren't actually losing valuable album days by posting a gig review.

PEK has really embraced/mastered the digital workflow. They record their performances straight to a laptop I presume, and really, within days the recording is made available. There's more to it than that, I'm sure, but it's a really high quality DIY approach.

When we reformed Leap of Faith at the beginning of this year after a lengthy hiatus where my day gig dominated my life, I set up a very high quality portable recording rig. I use 2 Neumann wide diaphragm condenser studio mics along with a microphone compressor, then to a small mixing board and to a rack-mounted Tascam studio recorder that records wav files on to a compact flash card. This system has enormous advantages - the mics are extremely sensitive and the compressor keeps the recording from clipping. The output is a digital file which can immediately be uploaded to a computer for post processing. I don't really have to do a formal mastering to produce a very high quality result - usually all I have to do is boost the levels a bit to take advantage of the full dynamic range of the CD format, add a little more compression if it is warranted, and use a little noise reduction if it is warranted. The quality of this process is so good that I will probably never use a recording studio again...