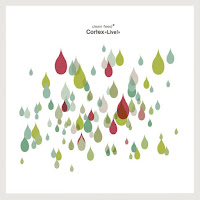 Cortex was hanging out outside of the small Brooklyn performance/practice space I-Beam when I arrived, the sidewalk kind of serves as the green room for the venue. We talked a little about their last set of concerts in the States about a year and a half ago and about drummer Gard Nilssen's recently released trio recording. They posed for a couple of pictures next to the chalkboard marquee and went inside. Then, something happened.


The mild-mannered Norwegian quartet comprised of Thomas Johansson (cornet), Kristoffer Alberts (sax), Ola Høyer (bass) and Nilssen (drums) were suddenly anything but as they tore into their first set. Conjuring the ghosts of free jazz past, present and future, the group's energetic set was a torrent of melodic and freeing music.

Alberts' hearty saxophone is a center piece of the music. Both brash and agile, he switches from post-bop lines to caterwauls in a moment's notice. Johnasson's brass work is sharp, his approach is somewhat terse but not truncated, and the ideas flow naturally. The rhythm section of Høyer and Nilssen are tight and driving, hearing the duo set the pace is a pleasure in and of itself.

Unable to control the impulse, I picked up an LP version of their latest from Clean Feed - a live recording entitled Live!- to compliment the mp3's that had been residing in my iPod. I couldn't help it, the record had been designed so damn nicely. The stylish gate-fold album sports some spiffy liner notes on the left, and an image of the group at play on the right. The records feature austere solid color labels with complimenting outer borders that seems to somehow lend the album an additional air of crispness.

The album was recorded in 2013 at Nasjonal Jazz Scene Victoria in Oslo. Opening with 'Opening' and closing with 'Closing', either the shows were crafted for an album or the songs were titled in post-production. The album begins with a nimble number that follows a minor pattern for a bit as themes come and go. Overall, the songs follows a tradition of more structured free jazz, where the moving parts and pieces help tie the improvisation together. On the song 'Endorphin' it's Nilssen's approach to the drums that propels the song, as he acts more like a melodic partner that than timekeeper. 'Gray Matter' is a different piece altogether - a somewhat heavier by the drums and bass seem to invite a bluesy approach. The cornet solo is a delight, and the sax digs deep for his passage, building from near silence to bold proclamation.

The live recording captures the group at a playful and precise high point and it sounds great. Live! is excellent document of a band that keros getting stronger. I was thrilled to see them play again after seeing them for the first time in 2013, and came away this time thinking the group was even more together while their arrangements looser.

As you wait for them come to your neighborhood, pick up a copy of Cortex's Live! Available at Downtown Music Gallery and Instant Jazz.