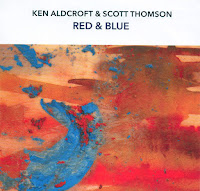 It occurred to me the other day that much of the music that I have been listening to recently has included the instrumental combination of guitar & trombone, whether within a larger ensemble or in a more smaller and intimate setting.  Either way, and including a variety of other combinations, I personally find the two instruments very complimentary in sound, so it was with pleasure that I then received the album Red & Blue to review, an album of freely improvised guitar & trombone duets.

Both musicians are well known to each other with Scott Thomson having played in Aldcroft’s Convergence Ensemble and it is clear on first listening that the instrumentalists are very comfortable in each others company.  There are four tracks in total, two named ‘Red’ and two ‘Blue’, with one of each of the colour pieces being a longer extended workout.

Aldcroft has established over the years a rich vocabulary to his free playing and has produced some excellent music such as the album One Sunday, a set of duets with William Parker.  Again he doesn’t disappoint here and flurries of rapid notes mix it up with more percussive sounds and atonal melodies.  The trombonist, Thomson, is as equally free in his playing bringing a wealth of playing techniques and sounds to the table, such as growls, muted timbres, vocalisations and more standard sounding tones.  Much of the music contains a busy and bustling feel to it with the two musicians entwining and interweaving their musical material around one another.  There is great consistency to the music that they conjure-up between them, although personally I would have liked a bit more diversity between the pieces, as a rich sonic palette, which then stays that way, can quickly become less bright and lively to the ear.  However, that’s not to take anything away from the playing on offer, and there are gradations and subtle inflections within each track.

On the whole this set is a great workout between the two instruments, which are freely engaged in open form dialogues throughout.  They certainly have a lot to say, which in turn demands careful listening for the complexity of musical information that is being delivered.
Paul on Sunday, October 04, 2015
Share