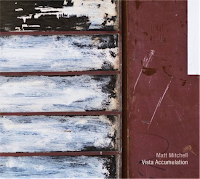 With 2013’s attention-getting duo release with Ches Smith, Fiction, pianist Matt Mitchell gave us a glimpse of a musical sensibility that was remarkable in its ability to weave together adventurous improvisation with rigorous, challenging compositional complexity.  Mitchell’s facility on the instrument can’t be questioned, as he’s one of the most in-demand musicians in contemporary jazz: he’s worked with everyone from Tim Berne to Dave Douglas, Rudresh Mahanthappa to Darius Jones, and a host of others.  But this new double-CD will go a long way toward helping to cement his reputation as a formidable leader in his own right.  At eight long, demanding pieces, it’s an overwhelming amount of music, really, to take in at once.  But the rewards to sticking with it are immense, as each listen reveals new dimensions and angles that have to be heard and pondered to be appreciated.

The record is aptly titled: Mitchell is not a composer who announces his objectives too quickly, with readily identifiable themes and melodic structures.  Rather, Mitchell’s pieces unfold gradually, with the whole only coming into view once the gradual aggregation of ideas has taken place.  This can be a bit frustrating at times, particularly if one expects instant gratification with one’s music; this is most certainly not listener-friendly, toe-tapping jazz.  But for those willing to hang in there with it, what you get is ultimately a lot more satisfying.

Mitchell has worked extensively with the rhythm section already: bassist Chris Tordini and drummer Dan Weiss have played with Mitchell at least since 2012, so they have an established affinity for Mitchell’s digressive, intricate explorations.  Added to the mix, though, is Chris Speed on clarinet and tenor sax, and Speed’s impact on the music is immediate and invaluable: he reinforces the melodic strands that emerge, however elusively, in Mitchell’s compositions, helping to give the listener a bit more of a foothold in approaching each piece.

It’s impossible for a review to do justice to each of the tracks, so I’ll just take one as an entry point: “Utensil Strength,” which leads off the second disc.  Mitchell and Speed open the piece at the outset, with Mitchell’s thorny left hand ostinatos and Speed’s repressed urgency on tenor creating a slightly unsettling sensation, as Weiss provides subtle commentary on the kit.  Then Tordini comes into the picture, providing the bass anchor that allows Mitchell to widen his focus, with arpeggios and chords coming and going, until the band comes together powerfully about two minutes in, with a rhythmically sophisticated melody revealing Mitchell’s Steve Coleman influence, and yes—we hear this band’s ability to find the groove when it wants to do so.  But that’s only the mood for a couple minutes, after which the group settles it down, moving into a more reflective section, only to pick up the melody again, to build once more as the band comes at us with even more intensity, Weiss’s drumwork finding an even more propulsive force.  At that stage, halfway into the piece, the tempo cools once again, fading into a meditative exchange between Mitchell’s delicate right-hand fragments and Tordini’s subtle arco exploration.  This is a wonderful interlude before the finish, with Speed re-entering this time on clarinet, the perfect counterpoint to Mitchell’s harmonically rich chords, as the two begin a dialogue that is eventually joined once more by Weiss and Tordini, as the band continues at a low simmer, with a terrifically complex unison section between Mitchell and Speed that brings the piece to a close.  The other seven tracks offer the same kinds of tension and release, and plenty of twists and surprises, that are worth savoring through multiple encounters.

It’s a fantastic collection of music, definitely worthy of a two-disc release without a doubt.  Mitchell has a lot to offer, and it’s truly time well-spent to give him the opportunity to fully share his distinctive musical vision.
Paul on Thursday, October 22, 2015
Share