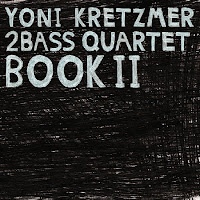 
Israeli, New York-based sax player Yoni Kretzmer career is characterized in his slow-burning evolution with no rush to release his music. Three years have passed since the debut release of his 2Bass Quartet - featuring double bass players Reuben Radding and Sean Conly and drummer Mike Pride, Weight (OutNow Recordings, 2012), until his own label released the quartet's sophomore album. In a similar manner, Kretzmer is not a leader that insists on controlling every aspect of his compositions. He trusts the quartet to follow his loose “written ideas”, letting them breathe and blossom organically, in emphatic yet open interplay, but leaving enough space and freedom for the personal contributions of all the musicians. Still, it is clear that Kretzmer feels at home with this quartet that challenges him and utilizes his qualities as a leader and improviser to the fullest.


Kretzmer describes the quartet as an outfit whose “earthiness” has become its trademark, and its raison d'être: “to manage to dive into the pits of the earth while maintaining a certain clarity and vividness, as tough seeing while having mud in the eyes”. This colorful description gives some idea about the quartet sound - grainy, unpolished and encompassing the lower registers, as if Kretzmer furious tenor shrieks aim to pierce the sonic walls comprised of dark, resonating double basses and pounding drums.


As on the quartet's debut, the sonic territory is still in the most adventurous terrains of free jazz; music based on intuition, power and energy, gravitating into cathartic climaxes, as when it is tapping to the legacy of the American fiery free jazz on “Freezaj” or on climatic, 20-minutes of “Number 4”. But the 2Bass Quartet has more than just power and energy in its can. Relying on its accumulative experience and strong bond as a working group and its musicians individual experiences as leaders in their own right, Kretzmer enables enough freedom to allow some chaotic, messy interplay, trusting the quartet to adopt again his ideas. The quartet experiences the full spectrum of its heavy rhythm section and plays on sifting pulses as on “Polytonal Suite”. It is not shy from expressing its emotional side through the more common stormy intensity, as on the opening “Haden”, a sort of homage to the late Charlie Haden, the gentle “Leaves” or the simple “Ballad”.