It's amazing how some things suddenly change for people when they're young, and their talent becomes recognised, and it's as if they're hot, and everybody wants to play with them, in various settings and contexts, and it's no different for Portuguese trumpet player Susana Santo Silva, who has been reviewed before on this blog and with high appreciation.

This year, she is even more prolific, with five new albums as a (co-)leader, all five of a totally different nature, including Lama's "The Elephant Journey" which was reviewed earlier this year.

The constant elements are the trumpeter's stellar playing, with a deep and warm sound all her own, even in the more adventurous moments, and with a clear interest in philosophical topics, as we can decode from the song titles.

We start with two albums today, and we will review the two other ones tomorrow, with an interview with the trumpeter somewhere in between. 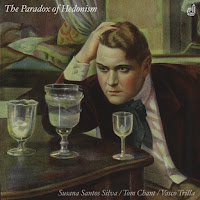 The "Paradox of Hedonism" is philosophical concept that says that you cannot acquire pleasure or happiness directly, they can only be acquired indirectly. And like this title, the other tracks of the album are all philosophical themes, either related to this paradox, or a little more remote like Nietzsche's "Will To Power". Our friend Wikipedia will tell you more about all this here. Pleasure and happiness are consequences, not objectives.

So what does this mean in musical terms? This is the task of Susanna Santos Silva on trumpet, Tom Chant on tenor and soprano saxophones, and Vasco Trilla on drums and percussion. The interesting thing is that you would expect a very abstract and high brow affair, yet it isn't. It's actually quite the opposite. It's a kind of organic improvisation, like the sound of nature or even better the sound of animals. You can hear them interact in short screams and statements, sometimes angry, sometimes gently, energetic or calm, but actually going nowhere at all. It all takes place in the moment, without clear direction other than what is happening right now, moved forward in reaction to what the other musicians are doing. The sounds are very close to the listener, as if you're part of what's happening, or at least in the middle of it, which makes it both intimate and disconcerting at times.

The result is really excellent, and despite it's obvious lack of accessibility, I also find it the best album of the three reviewed here. All three musicians share the same musical vision and maintain the approach despite the variety of angles by which they attack the concept. It's also relatively unique, which makes it fascinating.

This will not be for everyone's ears, but more than worth exploring for the more adventurous listeners, who will not be disappointed. 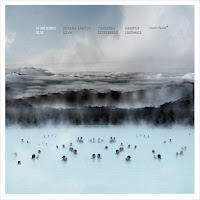 The second album is of a totally different nature. These are sounds of great distances, with an unusual line-up of trumpet, bass and organ, played by Susana Santos Silva, Torbjörn Zetterberg and Hampus Lindwall. Santos Silva and Zetterberg will be known to our readers, but Lindwall probably not, at least not to me, and that's because he is mainly a performer of classical contemporary music, and he also is the "titular organist of the Saint-Esprit Church in Paris".

So the sound of great distances, with the trumpet played with as if from the other end of a huge resonating space, with the organ offering an incredible somber and eery depth, and the bass is in between, probably closest to the listener, but equally epic in nature, and can be at times reminiscent of the Scandinavian sound of some ECM albums. It is expansive, open-ended, grand. Yet in contrast to the ECM sound, it has a darkness that is at times uncanny, as on "Atonality", where the muted horn plays a sad improvisation supported by quietly wailing arco bass and the distant organ, that gives a single bass drone and a few sustained chords, and then the whole intense edifice reduces itself to atonal, barely audible sounds.

The album consists of eleven improvisations, and they keep their unique approach to the overall sound and interaction in a very consistent way, often fascinating, daring, and above all mesmerising and moving. Even the last track, "One Note Song", is exactly what it says, yet when the beginning sounds like the sustained sound of a fog horn of a distant ship, the shifts in intensity and timbre turn it into something more somber and devastating, with just one note, just to showcase the vision behind the music and the quality of the three musicians to deliver it.

Giving this artist a spotlight is a great idea! She
deserves it, and I hope she gets lots of attention
from it. "If Nothing Else" is a wonderful album I've
been listening to for the last few weeks. Her
album with Der Beren Gieren is also superb.

For a few reasons, Susanna Santos Silva has completely passed me by. Thanks for the 2-part feature and interview. Her work is a blindspot, clearly, and I need to catch up!