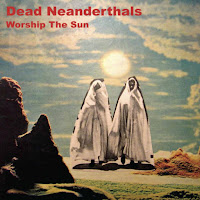 It’s fascinating to learn how people arrive at free jazz. The winding paths they travelled to reach the realm of boundless creative sound. A friend of mine grew up listening to King Crimson and Soft Machine - not too far a leap to his current interest in British free jazz. Personally, an attraction to folk guitarists like Davy Graham and John Renbourn lead to my discovery of artists like Bobby Timmons, and Charles Mingus. Those were my very first steps on the road to freedom. Consequently, it didn’t shock me to learn that Dead Neanderthals’ saxophonist Otto Kokke and drummer René Aquarius had prog rock and death metal pedigrees. What surprised me was how accessible and ultimately spellbinding the self-proclaimed purveyors of ‘New Wave of Dutch Heavy Jazz’ could be.


“FUCK conventions and FUCK expectations”. So begins the bio of Dutch sax/drums duo Dead Neanderthals. This is not Willem Breuker’s playful vaudeville jazz. The cover art might look like a private-press death metal cassette from 1987, but the music contained within is sonic warfare for the modern age. Worship The Sun is comprised of two long tracks, totals thirty-six minutes in length, and is ideally consumed in one uninterrupted sitting. As Bob Dylan’s twenty-seven minute pearl Nashville Skyline (Columbia, 1969) taught us, size isn’t everything. There’s more than enough here to satisfy multiple listenings, but be forewarned: it’s dense, often challenging music.


Obvious comparisons to Worship The Sun are John Coltrane’s Interstellar Space (Impulse, 1967) or Frank Lowe’s Duo Exchange (Survival, 1973), two duo formations featuring the mercurial drumming of Rashied Ali. However, there’s a special rawness and urgency that’s unique to Worship The Sun, and even it’s most extreme passages are logical and comprehensible. A great deal of credit must go to Marlon Wolterink, who expertly mixed and mastered the album. The first track, ‘Worship’ is especially well presented. Drums and sax are given ample room to breathe, and even though this is high-energy ‘heavy jazz’, Wolterink understands that complex, assertive music needn’t cause listening fatigue. He presents a spacious environment, captivating his audience by inviting them to lean into the music. Volume levels favor neither instrument, allowing Kokke’s soprano saxophone to dance seamlessly alongside Aquarius’ propelling march. In the hands of a less capable engineer, this album may have had a completely different result.


‘Worship’ begins with Kokke quickly finding his footing in the upper registers of his horn, shades of frenzied Lacy-esque bird-calls morphing into the boiling cries of an impatient teapot. It’s a full twelve minutes before Kokke rests briefly, only to launch into a smeared spiral of notes against the ever-supportive propulsion of Aquarius’ drumkit. The second track, ‘The Sun’ explodes instantly, building on the sonic boom that preceded it. It’s aurally grittier and louder, but remains arresting. Ten minutes into ‘Sun’, things approach a sort of summit. Both sax and drums expand across the entire atmosphere, and get even more frantic at the sixteen-minute climax. Kokke conjures hysterical bagpipe phrases, while Aquarius’ drums neither keep pace nor advance into the unknown. The duo present with such an assured intuitiveness, one could be forgiven for thinking they’ve played together for decades. The track ends with 30-seconds of quasi runout groove static which gently buffered this listener back to reality. Worship The Sun is one of the most engaging and satisfying duo albums I’ve heard in ages. Its unique provenance ultimately reflects David S. Ware’s perspective on music: “It's an ongoing, never-ending journey. It's an ocean you never will cross”. I look forward to seeing where Otto Kokke and René Aquarius lead us next.