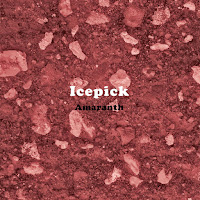 This record (along with McPhee's Zurich (1979)) is one of the first from Astral Spirits to see a vinyl release instead of their traditional cassette & download format.

As Astral Spirits labelhead Nate Cross and I continued our discussion, he said of this album:

"As you know, the first release on Astral Spirits was Icepick's 'Hexane' tape (which was a live recording that had more of a lo-fi quality to it, but was still incredible). As part of my Astral Spirits label launch, I was able to get Nate Wooley and Chris Corsano down to Austin for a weekend to play a show here in Austin. I also set them up at a studio while they were in town and 'Amaranth' is the result of these studio recordings. They recorded with Ian Rundell (who is in Ghetto Ghouls, a great punk rock band on Monofonus Press) so it definitely has a more punk feel I think - nothing fancy at all used in the recording but it sounds perfect. These guys literally knocked out this entire album (and more) in four hours one afternoon. I really wanted to present this as [one of] my first LPs because it shows the growth of Icepick and what they can do."


Rosso Corsa reveals the whole trio almost immediately. Four minutes in, Wooley drops, followed by Corsano - previously all over his kit - a minute later. Ingebrigt Haker-Flaten's bass is left to pizzicato solo. Wooley returns around the 6:30 mark with a savage, almost drunken moan. Are there voices? It's hard to say. Corsano's kit sounds like shells falling all around; shots: unheard. Wooley's horn becomes more insistent, then aggressive. Fluidity isn't sacrificed but neither is buzzed spit. With two minutes remaining in the track, overblown notes from Wooley phase into a fucking beautiful loungey blues noir followed by a muscular sprint to a reigned in - though not exhausted - finish.

Fuchsia smells a bit of brilliance. On a three-song album, it's the palette cleanser, a track of radio-play length sitting directly between the two long-form jams. Wooley puckers up and you can hear the sawdust falling from Haker-Flaten's bow as the opening bars belong to a tandem trying to literally scratch its way into the song. This is a prime example of what was missing on last year's debut. Poor recording and crowd noise provide that awesome live atmosphere but what is sacrificed is this. Fuchsia is a four-and-a-half minute masterstroke. By the start of the first minute, Wooley's incredible torturing of a spiritual blues is topped in thrills by Haker-Flaten's mad calligraphy. Imagine the sound Beethoven's pen must have made writing Eroica. Those ink splots and furious curls. It sounds like that. Wooley's trumpet rises though. First to diseased barks and then into something more beautiful before he blows out his air - all of it - and gives the song back to to Haker-Flaten. By song's end, the bassist's tragic arco has watched and heard Wooley's trumpet sputter around the room like a deflating balloon. It lands. I repeat, a masterstroke.

Rare Rufescent follows and closes the record. The opening bars belong to Haker-Flaten's solo percussive bass. His notes pop like the soundtrack of a spaghetti western, all saloon doors and dusty boots and revolvers. Corsano enters. At almost the minute mark, Wooley follows with a series of increasingly intense trills. Haker-Flaten keeps slapping the shit out of his instrument. Wooley becomes a tad more soulful before corrupting his phrase with an overblown note and launching into a passage that sounds pure New Orleans.

Wooley introduces a short vamp before deconstructing it in every way possible through fiery and limber lines, themselves sabotaged by the occasional overblown note. Finally, the horn releases to Haker-Flaten's bellowing, motor-like arco. Corsano propels but keeps the focus on Haker-Flaten who continues to move his instrument between a dying man's groan and an ocean liner's throaty roar. Midway through the song, Haker-Flaten's "ship" closes in on land and Wooley blows a scattering of warnings. For the next few minutes, it's a barren carnival of rust: the only sounds, like those of a decaying swingset. From this, Wooley rises with long, solemn notes, buoyed by Haker-Flaten's arco. When Corsano returns, it's on the heels of the trumpet providing scales touched by that twisted New Orleans sound. Corsano begins to coax a tad more momentum and touch more nasty from his kit as Wooley soars above with a gorgeous lament. It's red all over. Jazz was born here. In this "place". In this shade. 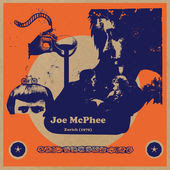 AS labelhead Nate Cross said the following of this release:


"This one is unbelievably special for me. As you may have figured out already, Astral Spirits is named after the McPhee song [of the same name] from his Trinity LP. Since I know Ingebrigt [Haker-Flaten] (living in Austin for some time now) and others who know Joe, I emailed him about doing a release. What you hear on Zurich (1979) was originally recorded directly onto cassette tape (in 1979) so Joe thought it would be a fitting release for AS. After that, Joe kept mentioning how he discovered Albert Ayler's Bells just by the beauty and simplicity of the album design, so I decided I really wanted to make this unique andcollectible release. We hand screen-printed covers (designed by Mason McFee, who has done all the designs for AS), got stamps made for the backs of the LPs with the info and thanks (so each LP is hand-stamped as well), and then reached out to another Austin legend, Tim Kerr, who painted a portrait of McPhee specifically for this release which will be included as a poster. (Also, there will be 10 copies of these 250 LPs that will feature unique Tim Kerr paintings on the actual LP jacket - anextra special edition.) It's only a one-sided LP BUT the music is exquisite and needs to be heard regardless of [how it's packaged]. The music was mastered and cut directly to vinyl by Adam Smith (who moved to Austin recently and owns an old 1940s lathe machine ...). The record has a unique sound quality to it ... a bit less polished and a bit more in your face, which I absolutely love. [The making of the record] was a beautiful process to see/hear."

As for the sound behind the story and the handsome packaging:

It was recorded March 12, 1979 in - you guessed it - Zurich. It's comprised of a single nearly-twenty-minute solo simply titled Tenor Solo. And its lament begins with successive "blown" notes - not "overblown", just air through the mouthpiece and reed amplified slightly by the horn's bell. A theme is stated, followed by several repetitions. The variations on the theme commence and McPhee begins to really toy with his dynamics. He drops to a pianissimo and roars to fortissimo without warning, often without even a hint of a bridge between. At just past five minutes, McPhee breaks from the theme to explore several short motifs, delivered staccato with note boundaries articulated extremely well. A minute later, his phrases become more lyrical before the theme is restated in a fiery altissimo. Vibratos follow and fade nicely to a revisited theme, with McPhee "speaking" softly.

An odd bit of serendipity: around the 12:20 mark, someone coughs. It proves to be a strange line of sonic demarcation, as, seconds later, McPhee introduces a concurrent theme in the form of what starts as some funky afrobeat before becoming a full-on "beat-box" of sorts, complete with McPhee climbing a string of notes with high groans on the forebeat. That, and the sound of his lips making physical contact with the reed, makes this movement of the piece seriously percussive.

McPhee climbs out of the movement with a sweet little riff repeated over and over again. Then, with just over two minutes left in the piece, it's like the love of his life walked through the door. Suddenly, he's playing just for "her". He projects and describes their entire life together. Their jobs, their children. Their interests, their fights. Their passions and-

Then, the tape cuts out.