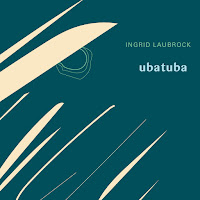 Ubatuba was recorded in September 2014, a few days after I caught Ingrid Laubrock’s newest group in concert. The performance was brazen (both in instruments and attitude), but also slippery; a whorl of written and improvised work, its immediacy was about all I was able to grasp. The news of an album was exciting: now, something to sit with and more fully absorb.

The quintet—Laubrock and Tim Berne on saxes, Ben Gerstein on trombone, Dan Peck on tuba, and Tom Rainey on drums—sheds the instrumental variety of Laubrock’s other projects in favor of more deeply exploring wind instruments. Jettisoning the piano as a compositional tool, Laubrock instead decided to use her saxophone and paper to work out Ubatuba’s pieces. The result is music that shares both the slow-burning, timbral focus of her Octet work and the pointed, dramatic improvisation of Anti-House.

While Laubrock’s goal is often to “leave the listener guessing” about the fuzzy line between writing and improvising, the album still feels a bit more tightly-controlled than the band in a live setting. Ubatuba opens with “Any Breathing Organism,” four sets of lungs entering and exiting a warm but increasingly tense drone. There’s little room to break from the script, though the drone subsides at several points for Laubrock to take some interval-leaping solos over Peck’s tuba blats and Rainey’s frantic tom-work. Other tracks like “Homo Diluvii” and “Any Many” have complex melodic streams in which musicians jump back and forth between lines, resulting in a flux of converging unison lines and diverging counterpoint.

Here and there are threads that connect this music to jazz: a bop-ish saxophone solo, or Rainey’s tapping hi-hat. But even though the points of reference are all there, the feeling is different. The music is often decidedly unjazzy, and focusing solely on the horns draws one near the realm of chamber music. With Rainey in the mix, there’s some affinity with the weird forward motion of Henry Threadgill’s music. His role is often one of punctuation, adding quick emphasis to a series of notes, or providing a rhythmic offramp for the others to transition into freer playing. “Hiccups” spins around and around in circles, the trombone and saxophone a centrifugal surge held only by Rainey’s beat.

Ubatuba rewards careful and repeated listening. While clearly a vehicle for Laubrock’s increasingly adventurous writing, the music provides plenty of leeway for her partners’ idiosyncrasies and creativity. If I had a single complaint, it would be: not enough Gerstein! He’s a tremendously accomplished player that doesn’t always get the attention afforded to some of his peers. A great late-year entry, and an album that was certainly worth the wait.