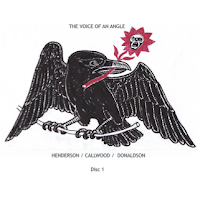 
Recently my friend Peter Rabenda, a dedicated Brötzmann fan, recommended to me this album with the brief remark that it was his album of the month. I was curious, so I found a copy and played it immediately - just to become distracted after five or six minutes, thinking: "Okay, nice music - but album of the month?" However, I jumped to conclusions, which I realized shortly after.

First I have to admit that I wasn’t aware that there is a relevant improvised music scene in New Zealand until I came across this album. I found out that Jeff Henderson is an integral and prominent figure of that scene, who has performed with internationally renowned musicians like Steve Lacy, Marilyn Crispell, William Parker, Evan Parker, Peter Brötzmann and many others. In the mid 2000s he founded this trio with Tom Callwood (b) and Anthony Donaldson (dr), which also goes under the name The Melancholy Babes and which has released an album called Opium in 2012.

It took them three years to produce a follow-up and what makes The Voice Of An Angle so captivating is Henderson’s superb saxophone sound and the way the group structures its improvisations. “Mangrove Man“, the first track, serves as a perfect example for this.  At first the trio seems to look for the right path, something they might go for. Then they bow their heads to the Chicago scene saxophone trios - DKV, Rempis/Abrams/Ra or Roebke/Shelton/Daisy. So far, so good, but this is nothing special.

However, after 10.45 minutes the first part comes to an end, the track seems to peter out. Then the band seems to start anew, as if there was a secret understanding saying: “Okay, that was nice but let’s try something new“. From then on we listen to a completely different piece. It is dominated by a tribal groove initiated by Donaldson and supported by Callwood, as if they were playing a huge kettledrum. Both create a unison, minimalist, ritual and shamanic atmosphere, the pulse is very raw, even brutal at times. They keep it going for almost ten minutes, the only thing that changes is the volume. It increases very slightly so that there is an intensity that is hard to stand - before the piece literally collapses at the end. Above this pulse Henderson’s saxophone hovers in the best Brötzmann  style - he’s overblowing complete passages,  wailing and crying, shivering and moaning. He is the angry medicine man, the actual shaman.

Four of the five compositions work that way, only the last track “Bird of Parasite“ differs slightly.  In general, the band uses the musical elements they have at their disposal very effectively: the aforementioned flogging groove parts, which alternate with silent and self-reflective passages and solo parts, or sound concentrations, which take turns with open, airy elements.

This is wonderful music played by an amazing band, it’s unique in its conception. Feel free to dance to parts of it. My album of the month, too.

The Voice Of An Angle is available as a download only (as far as I know).

You can order and listen to it here: