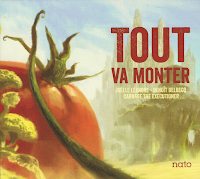 "Tout Va Monter" is a collaboration between Joëlle Léandre on bass, Benoît Delbecq on piano and Carnage The Executioner on voice, beatbox and percussion. Who? Yes, Carnage The Executioner, the stage name of Terrell Woods, rapper and beatboxer from Minnesota. Interesting you might think and it almost made me put down the album without listening to it, allergic as I am to rap music, but then there is no mention of "rap music" on the album's cover, so let's give it a try.

And well, Léandre and Delbecq have always been open to include other sounds in their music, opening their minds and ears to other people's projects, and so why not make an effort myself?

And honestly, this album is really worth listening to, because Carnage The Executioner does not rap on the album, he adds percussion and beatbox, and some electronics I guess, and it all gells quite well with the music of the jazz musicians, who open up their music to let him in. The result is often very rhythmic, but without necessarily having a steady beat, the music keeps its open jazz feel. The thirteen tracks are all relatively short, but upbeat, full of playful moments and strange incantations, as if this was some ritual music, a community dance in which everybody is welcomed, adding eery and ephemeral sounds too resulting in a deepening of the mystery, because Delbecq's piano sounds like percussion, and Léandre sings in her usual style, and Carnage's beatboxing sounds like real percussion, and then you have the real piano and the real bass coloring and shaping the music.

It is as fun as it is perplexing and surprising, and a great example of how musicians from different horizons can meet and create something meaningful, by listening hard and moving in each other's direction without relinquishing their own sound.
Stef on Monday, December 28, 2015
Share