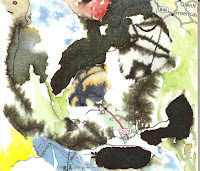 I couldn't agree more with Larry Ochs' statement that "if you're looking to understand music, one is approaching it the wrong way", because it is the experience that counts, the total impact of the sound on your own biochemistry, including such bodily reactions as emotion, spiritual delight or goose bumps.

On this phenomenal album, the saxophonist assembled a New York band consisting of Ken Filiano and Pascal Niggenkemper on bass, Nate Wooley on trumpet and Harris Eisenstadt on drums, at the occasion of Ochs' curatorship at The Stone in New York, and these musicians, under Ochs' leadership create that unique experience that escapes rational disection and analysis.

The approach taken here is to create musical imagery, scenic moments that are partly composed, and mostly improvised, as if you can see the music in your mind's eye, and these are mostly abstract landscapes with changing and shifting horizons and colors, with a strong horizontal feeling of flux as the unpredictable sounds move the listener forward on this journey.

The album consists of four tracks, three of which are dedicated to visual artists - Wim Wenders, William Kentridge, Kelly Reichardt - in the same tradition as Steve Lacy, and it are the movies or visual installations by these artists that act as inspiration for the music, even if it is not made to accompany these movies.

One of the most striking features of the sound are the two basses, which lay a great sonic foundation for the music, not rhythmically, but in terms of the overall color of the pieces, acting in concert, or alternately, challenging each other or reinforcing the sound. Yet the entire band is stellar, five musicians who live in their most natural habitat of free flowing sounds, joining the short themes that pop up once in a while, then take off again on different paths but in the same direction.

It's the way I like music, beautifully free, sensitive and deep.