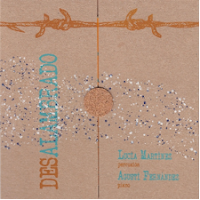 The duo of piano and drums brings to mind some of the seminal recordings of free jazz: Don Pullen and Milford Graves at Yale, Cecil Taylor’s historic concerts with Max Roach and his multiple meetings with European drummers in Berlin; Irène Schweizer’s various duo albums with the top percussionists of the improvising world; the recordings of Misha Mengelberg and Han Bennink. Desalambrado (Wire Fencing) stands both within and outside that tradition, in a way we’ve now come to expect – not just one thing but illustrations of a number of possibilities.

Piano and drums frequently produce a barrage of sounds and feats of bravura, two huge and often competing spheres of resonating energy reflecting that these are both percussion instruments. This is what we have on the title track – an exploding star, releasing cascades of tone clusters, rapid trills and glissandi on the piano, which gradually fade like shock waves, echoed by pulses from Martinez’ trap kit. ‘De Ida Y Vuelta’ (Back and Forth) sounds like Fernández’ left and right hands are playing a game of ping pong across the keyboard, with Martinez’ sensitive snare stuttering alongside. He then goes for a long run (more of a blur) chased by the drums, before returning to his game. They both make it sound easy, but playing of this fluency and attention to dynamic shifts is achieved by few.

It’s not all pyrotechnics, however. In ‘Venga La Esperanza’ (Come Hope) Fernández picks out the bare outline of a melody that never seems to fully resolve. Gradually, it becomes bolder only to fade away, leaving the patter of percussion to bring the track to an end.

Other pieces take place on an altogether different scale, still exploring the percussive nature of the instruments, but more as pieces of sound sculpture within an integrated auditory field where for long stretches it’s impossible to distinguish the treated interior of Fernández’ piano and Martinez’ collection of exotic percussion. In ‘El Sonido De Los Ecos’ (The Sound of Echoes) we enter a finely observed world of small things in which many of the sounds seem to emerge from and shrink back into, nature itself – tappings, rustlings and scuffles. ‘La Otra Orilla’ (The Other Shore) is full of scrapes and groans which could have been conjured up from the spirit world.

‘La Vida Sin Maletas’ (Life without Baggage) is a curious piece. It begins with the kinds of intervals and use of extreme registers one finds in the piano music of Messiaen, combined with tiny gongs and metal percussion. Everything slows, almost to the point of evaporation with scraped cymbals, tiny trills on the piano strings and Martinez’ use of brushes. Internal scrapings on the piano reinvigorate the piece, along with a primitive electronic whine that sounds like a stylophone being disassembled. Then it ends.

The album itself closes with Aguatrémula (Shimmering Water) a virtuoso display aptly described by its title, which can be seen in the second clip below. Truly breathtaking.

This is the first release on the Pasoancho Productions label, run by Martinez, Hebert Cruz and Mario Burbano. The CD is limited to 260 copies, with a nice hand-made jacket. There’s a special edition of a further 40 in a carton with a small sculpture designed and made by Cruz. The album is also available as a download.