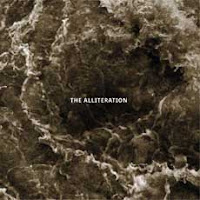 I am going to have to ask for forgiveness on this  ... as we wrap up 2015, it seems a bit ... umm ... untimely to mention this 2014 release, but it's one that was brought to my attention only recently, and one that is worth the brief breach of the time-space continuum.


The Alliteration's eponymous debut is a meta concept - I'm not sure if they chose the musicians based on their names, but it seems that it would be quite a feat to gamely gather these excellent Berlin based musicians with the cooperating qualities of sounds in their names otherwise: Nikolaus Neuser (trumpet), Manuel Miethe (soprano saxophone), Floros Floridis (clarinets), Gerhard Gschlössl (trombone), Antonis Anissegos (piano), Akira Ando (double bass) and Maurice de Martin (drums). The concept carries over to the song titles themselves: Aural Altitude, Being Between, Cypher Circle Song, Dark Diphthong, Equal Equals Equal, Fertile Fossils, and Gelbgold Gambit.

So, there is the bit of textual fun and then there is the music, which is a highly listenable collection of free improvisation that is entirely engrossing. The group works as a collective, no one instrument dominates, though Anissegos' piano playing is an essential element, serving as a binding force between the horn work and the drums and bass. Often going into furious flights, the woodwind work of Floridis is complimented by the arc of the soprano sax and clean lines of the trumpet. What really stands out is the diversity of the moods of the pieces, each one with a distinct personality. Technically speaking, there isn't much over-blowing or pushing the instruments to the extreme, rather the music has a very lyrical quality to it.