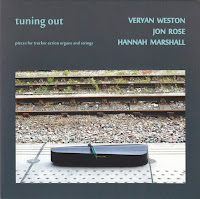 Somehow this has become the "year of the organ", with albums by Aine O'Dwyer, Jean-Luc Guionnet, Gabriel Pinto, Hampus Lindwall selecting the instrument to create new musical soundscapes and angles of approach.

On this double album British pianist Veryan Weston uses the "tracker organ", i.e. the mechanical organ that is to be found in churches, and the nine improvisations are performed here in churches around England together with Jon Rose on violin and Hannah Marshall on cello. The tracker organ offers the possibility for the musician to play with the 'stops', pulling them out while the key is pressed, resulting in new sound textures. The two string instruments adjust their playing to the new tones played by the organ.

The result is unusual to say the least, and often stunnning, not the solemn or reverent sounds you expect in churches, but rather the nervous and agitated sounds that correspond with nature on a windy day, when trees and grasses and plants wave back and forth, pushed in the same direction, full of intensity and relentless dynamics yet without moving as such, still firmly rooted somehow in the natural sound of each instrument. Or is it not? Not entirely, because not only are the organ stops used to create microtones, the strings are also tuned differently to allow for a better and more surprising interaction and dialogue. Jon Rose compares the collaboration of organ and strings to the most basic animal digestive system : wind, guts and pipes. This sounds irreverent, and the music itself is not as digestive as described here.

Quite to the contrary, the effects of the quarter and eighth tones result in quite surprising music, totallty unfamiliar and new, yet at the same time strangely welcoming too. You do not always grasp what is going on - at least I don't - yet the combination of sounds is strong, and leads the listener to dark atmospheres, fresh surprises, light and playful interactions. Like with all good music, you can only surrender to what is being presented, and enjoy the journey, even if it leads you to uncharted territories.