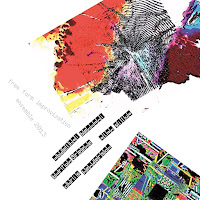 In his book on Derek Bailey, Ben Watson quotes John Fordham on free improvisation: “the din, if you’re unprepared, can verge on the traumatic. Not because it’s that unpleasant, or that deafening, or even inexpert (its far from being that) but because it continually reinforces this awesome, discomfiting strangeness.”

Little can really prepare you for the true strangeness of Alan Silva’s synthesizers. You’re immediately plunged into Free Form Improvisation Ensemble 2013, like a diver hitting the water. Label-head Julien Palomo would refer to this as the “real free jazz” of Paris: “the real, lowdown, dirty experiment,” the expats and rejects of the establishment that soldier on in small clubs with small audiences, in service of the music and the music alone. Much of it is ugly and goofy and risky and awkward. It isn’t about cultivating an aesthetic or showcasing virtuosity (at least not as an end in itself). Instead, it aims only to resist the pull of those black holes of music-making: normalization, systematization, institutionalization, homogenization. This is not to say that history or reference are effaced—rather, the uncanny prevails.

Free Form Improvisation Ensemble 2013 is an update to Silva and Greene’s original Free Form Improvisation Ensemble, which first convened more than 50 years earlier in 1962. Despite forgoing the bass, Silva in many ways still occupies that missing role: he’s the aural glue that binds everything together, a sort of omnipresent force of sound that his bandmates must constantly contend with. Though normally something I’d be wary of, former Sun Ra Arkestra drummer Chris Henderson’s electronic drum kit becomes a strength here, because it allows him to more fully commit to Silva’s soundworld. At times he can add a spacey depth, or cross swords with Silva’s odd percussive effects. A long solo that closes the first disc is a testament to Henderson’s musicality and the diversity of the kit.

Greene and Bennani then become the “traditional” instrumentalists. Both are prudent collaborators: Greene is all crystalline chords and shimmering arpeggios, the star-flecked backdrop to Silva and Henderson’s sci-fi adventures, while Bennani narrates in his cool, assured voice. Speaking perhaps best describes Bennani’s tenor playing: he has a range and cadence that's more akin to a raspy whisper than scales of notes or jazzy licks. Sadly, this would be his last appearance on record following his untimely passing in August.

For the most part, FFIE 2013 keeps up a thoroughly weird ambience across its two discs, even if some of the synthesizer and drum sounds flirt dangerously with kitsch. But then again, nothing is safe from subversion and re-deployment. Returning to Bailey, he often said that non-idiomatic improvisation must be the oldest form of music. There’s a Built to Spill album called Ancient Melodies of the Future. That's what FFIE 2013 sounds like: tomorrow’s primordial music, beamed back from some ancient future. Can I claim to love all of its nearly two hour runtime? No. But much of it is brilliant, and at no point was I bored—no single moment is ever indicative of what still lies ahead. It is fearless music, awesome in its strangeness, and traumatic to any preconception.