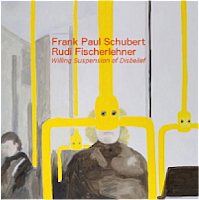 “The willing suspension of disbelief” was coined by the English poet, critic and aesthetician Samuel Taylor Coleridge. The theory claims that in the arts and literature, we are prepared to accept certain features that in other circumstances would be dismissed as false or artificial - things which could not take place in the real world - because they actually sharpen our appreciation of that world. It‘s through the artifice of the theatre or of a movie that we gain insights not apparent in the mundane processes of the everyday: the magic that lies beneath the surface of humdrum reality.

Frank Paul Schubert (ss) and Rudi Fischerlehner (dr) have been acquainted for a while. Fischerlehner founded Grid Mesh with Schubert (and guitarist Andreas Willers) but left after their second album. The two share the same rehearsal room in Berlin however, and on a change of shifts they often jam.  Eventually, they decided to record their improvisations – the microphone set up is perfect, especially for the drums. Willing Suspension of Disbelief is the result. The music was recorded in an afternoon, and it’s everything they recorded, in the order it was played. And here - according to Schubert - the title comes into play. The “willing suspension of disbelief“ refers to the post-production process: what you want keep for an album, what’s acceptable for release. In the end they decided to keep everything, even passages which drag. The album‘s the unadulterated result of that afternoon session.

The key improvisation is the 27-minute “Tracks“, which contains everything from tender moments to harsh outbreaks. At the beginning Fischerlehner strokes his instrument more than he actually drums, while Schubert prefers long, persistent notes. But soon the track changes. The character of the music switches between modern classical, eastern and European free jazz, picking up speed and becoming more muscular as it proceeds. The improvisation is dynamic and unpredictable – it’s never clear know where the music is headed. Both explore the full potential of their instruments, sometimes humorously. There’s another twist: the track almost peters out after sixteen minutes, but manages to recover into classic free jazz mode. It even swings here and there.

Schubert’s playing sounds like a combination of Evan Parker and Steve Lacy, and his breakneck pace reminds me of a very free Jackie McLean, but ultimately he has his own voice. Fischerlehner is a drummer who stands in the European improv tradition of Paul Lytton or Paul Lovens, using extended materials he really communicates with Schubert, it’s like two old friends chatting on the sofa in the afternoon.

The Willing Suspension of Disbelief is a little gem, sparkling amongst the other excellent releases we’ve had in 2015. Schubert has said that if only one of his albums survived, he’d be happy for it to
be this one. Worth checking out.