One of the best experiences in life is finding a new musician to love. It’s doubly rewarding when that musician has a discography as deep, wide and varied as Ivo Perelman’s. After being asked to cover three of Perelman’s new projects on Leo Records, I felt a fair bit of consternation - what could I possibly say about Perelman’s work that hasn’t already been said by someone with more expertise? But then I remembered: this is improvisational music! The modus operandi is constant expansion, leaps into the unknown, and missteps that land you somewhere far greater than your intended destination. Thus, I took a deep breath, and took a dive into the sonic world of these three incredible recordings. 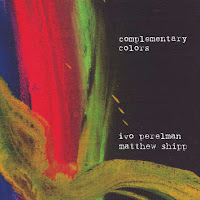 Recorded in May 2015, two months after the duo’s previous album (Callas, reviewed here by Colin Green), Complementary Colors continues their endlessly fruitful partnership. Like that album, the compositions were titled retroactively. This method of naming is perhaps not uncommon in the world of improvisational music, but in Perelman’s case, the titles seem to be frequently linked by some overarching theme or idea. For Callas, he chose the names of various roles that Maria Callas had played throughout her career. For this one, as evidenced by the album’s title, he chose colors that, when mixed together, negate each other to become a grey-scale color like white or black. When placed side-by-side, however, these same colors create a strong contrast; they appear more vibrant and alive. Likewise, the sounds and moods that Perelman and Shipp conjure up are enlivened by the contrasts between them. For instance, Shipp’s style is largely romantic; while he does occasionally let loose and tumble wildly over the keys, he is more apt to keep things relaxed and introspective. On the other hand, Perelman is inclined to take unexpected excursions, short jaunts that inevitably end up with the impassioned altissimo wail that has become something of a signature for him. However, he’s equally comfortable with a more conservative approach, offering full-bodied, languorous stretches of notes that suit Shipp well.

The piece entitled “Blue” is, like the color whose name it shares, cool and crystalline, a self-contained structure carved from ice. Shipp’s chords waft beneath Perelman’s stately intonations like fog, imbuing the whole affair with an ethereal quality. “Red,” on the other hand, finds Shipp in a more playful mode, offering up spry runs and clusters. “Blue and Red” begins with Perelman’s lone saxophone, but Shipp soon joins in and pushes him to exuberant heights. Perelman’s explorations of the dynamic range of his instrument are consistently intriguing, largely because of how listenable they are. He is bold without ever being confrontational or brash. He wanders down circuitous paths, observing, examining, occasionally latching onto short phrases and elaborating them, occasionally abandoning them altogether - but through all of this, he always makes sure to maintain a coherent sense of melody. “Magenta” returns to the solemn refrains of “Blue,” but the passages are even more serpentine and winding, so that it’s difficult to guess where they might end up. By comparison, “Green and Magenta” is more straightforward, with the two employing repetition to give the piece a stuttering, jumpy sense of momentum. Closing the album, “White” is lovely and understated; Shipp’s playing is spacious and elegant, with Perelman making use of a rich vibrato that provides emotional heft to the piece. It’s a wonderful conclusion to a wonderful recording. 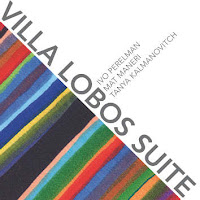 Recorded in the same month, Villa Lobos Suite takes an entirely different direction. The lush and romantic stylings of Matthew Shipp are replaced with the bristling, dissonant work of violists Mat Maneri and Tanya Kalmanovitch. Maneri and Perelman have worked together before (on last year’s Two Men Walking, for example), and Maneri has done duets with Kalmanovitch, but this is the first time for all three of them to come together in a trio. Unlike the other two albums reviewed here, no titles were given to the pieces. It’s perhaps to easy to see why; while Complementary Colors and Butterfly Whispers display a range of moods and melodic themes, Villa Lobos Suite is relatively monochromatic - a single frequency with varying degrees of intensity. It’s dedicated to famed Brazilian composer Heitor Villa-Lobos, a man whose work Perelman has previously contended with on  1994’s Man of the Forest.

This was the last record I listened to out of the three, and it was certainly rewarding to hear Perelman operating in such a different context - and what a context! Maneri and Kalmanovitch scrape and slide across the strings with unabashed ferocity. The interplay in which they engage has hints of Béla Bartók’s famed string quartets, with their idiosyncratic blend of the savage and the refined. It makes for an incredibly dense foundation, one upon which a lesser saxophonist would easily stumble, but Perelman doesn’t falter. In fact, he flowers. The three of them have a near-psychic bond, and they engage in an impeccable back-and-forth that, because of how responsive and sympathetic it is, sounds composed. Out of the three records, this was probably my favorite. While I love Shipp’s piano work and how well he and Perelman interact, this particular combination is more compelling, precisely because of how abstruse and enigmatic it is. It gives me the same feeling that Cecil Taylor’s best work give me - a sense that a new language is being articulated and worked out, right before my eyes (or ears, as it were). Highly recommended! 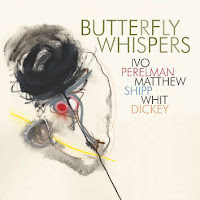 Two months later, Perelman and Shipp were joined by drummer Whit Dickey to record Butterfly Whispers. With composition titles referring to the processes of cultivation, fertilization, growth, and human sexuality, I came into this album with the expectation that it would be a little looser, warmer, and more unrestrained than Complementary Colors. Indeed, Dickey’s drums bring a restless energy to the proceedings that recall the first days of spring: creatures stirring, sprouts pushing through the soil and towards the sun. Dickey doesn’t direct the flow of the pieces in any forceful manner, however. For the most part, he’s providing a drifting pulse beneath Shipp’s unruly runs and Perelman’s cascades. The first piece, “Waiting,” is a lovely introduction: Shipp and Perelman ascend and descend the scale together almost teasingly before Perelman takes frantic forays into the altissimo register. Midway through, they align with each other again to produce a dramatic bell-like oscillation behind which Dickey sparingly taps. “Secret Garden” is a solo piece by Shipp that, despite the calm contemplation implied by the title, establishes a mood of quiet desolation. On “Almost Spring,” Shipp stays out of the picture completely, giving Perelman and Dickey time to engage in a rhythmic, exploratory dance. On the final composition, “Her,” Perelman offers his most impassioned blowing yet, thus ending the album on an indisputably euphoric note. This is a fairly short collection of pieces, but there’s a lot to dig into and enjoy.

Excellent reviews Derek. A great start to the New Year.

Thanks, Colin! These albums are a joy to listen to - I'm very thankful to Paul for introducing me to Perelman. I hadn't really given him a chance before these three, but now I'm practically addicted.

Nice and well-written reviews, Derek. Perelman is a musician I have to dig deeper, for some reason he hasn't been on my radar.

He's great! He brings a very unique and singular style to the tenor saxophone..warm, rich, melodic, but still willing to take chances and shake things up. I recommend checking out "Callas" with Matthew Shipp.