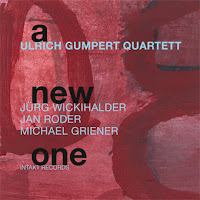 It is the end of 2015, and I am staring glumly at the pile of yet to be reviewed albums by artists whose works need to be heard and discussed. And while I have already submitted by “best of” list, I pull out the next album to be reviewed, and after many listens, I’ll be damned if this isn’t one of the best of them all to come out in 2015.

The Ulrich Gumpert Quartett has dropped a bomb of an album. A New One, their latest on Intakt records, is simply the best album that Thelonious Monk never wrote. Or the Steve Lacy/Mal Waldron groups. It is a triumphant marriage of bop and free jazz, music that swings with an edge to it, sometimes biting but never vicious. This is fun, exciting music! The 11 track album, recorded in 2014, begins with the properly titles “The Opener,” a swinging hard bop tune that has a feel of an old Art Blakey 50’s Blue Note album, Jurg Wickihalder out front with his saxophone, Gumpert on piano, Jan Roder on bass, and Michael Griener on drums. Gumpert’s playing is a fusion of the eclectic swingingness of Monk and the exploratory freeness of the early 70’s Mal Waldron, with Gumpert’s own European sensibilities, which can be clinical at times. With Roder and Greiner, Gumpert’s rhythm section allows for Wickihalder to move about with range and enthusiasm.

On the title track, “A New One,” Wickihalder rolls off a burst of rolling notes, then the others launch into a very aggressive sequence, piano out front in a breathtakingly fast free improvisation. “Recitativo Secco” is a melancholic track, noted for Wickihalder’s playing, moody and somber. “The Bop & the Hard Be,” is a stand out, with Gumpert soloing at the beginning, quoting Monk, before the group kicks into a high swinging, foot tapping mode. Wickihalder channels Steve Lacy and Charlie Rouse, soloing freely like the former and grooving like the latter. A great homage to the past, whilst being contemporary. “100 Maassgelinzerte” is another brilliant track, Wickihalder now referencing Monk in a gorgeous little solo at the beginning, then the others join in; a rollicking, slightly atonal tune, dopey in that special Thelonious manner, recalling his moments of ecstacy as he arose from his piano seat to do a little jig. “Number Nine” again uses that loping rhythm as a basis for a subtly swinging bop tune, emphasis on Gumpert’s soloing, keeping with the bop tradition, dextrous and fluid. Wickihalder follows with a medium tempered, swinging solo of his own. “Ja?!” has the feel and flavor of a Steve Lacy tune, combining the complexity of Monk with the openness of free improvisation, Wickihalder deftly navigating through the dense and difficult sequence of notes, as well maintaining the speed and aggressiveness that the others have put forth. The contrast between Roder and Greiner’s frantic pacing and Gumpert and Wickihalder’s controlled and complex phrasings is effective, and creates a good tension throughout the track. “Scrollin’” is another excellent tune, exploding in the beginning with a wild, rolling theme, going from low to high notes in a quick crescendo. It moves to a sprightly paced bop swing, highlighted again by Gumpert’s soloing, as well as Roder’s, which is starkly quiet. The others rejoin, climaxing with the same theme that began the track.

A New One is a bright, positive, absolutely ass kicker of an album, full of toe tapping moments, passionate and intelligent playing. A triumph for all, and a great album to close 2015.
Outstanding!
Paul on Tuesday, January 05, 2016
Share