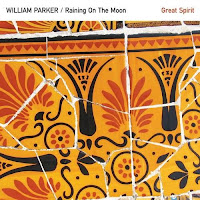 Sometimes, one has to be reminded that traditional forms of jazz can still be as powerful as experimental and free improv. William Parker's Corn Meal Dance is one of those, a powerful bop album with vocals. Eight years later, AUM Fidelity has released music from those same sessions, Great Spirit.

The album is comprised of five completed tracks, one improvised track, and a throwaway final track that is more of a sketch than anything substantial. What is substantial are the wonderful four tracks at the beginning of the album; rich spiritual bop jazz similar to Doug and Jean Carn or Henry Franklin albums on Black Jazz from the 70's. Leena Conquest's voice fits within this aesthetic perfectly, having a gorgeous tone and flavor without being overly dramatic. William Parker's bass playing is subtly funky, something that he doesn't get enough credit for, because it is this funkiness that establishes a rhythm that guides and moves the other musicians throughout the compositions. Rob Brown (alto sax) and Lewis Barnes (trumpet) form the front line of horns, in the manner of the horn section from an Art Blakey Blue Note album, with Eri Yamamoto (piano) and Hamid Drake (drums) subverting the traditional roles of a supportive rhythm section with slight atonal notes and accents and changes in pace.

Standout tracks are the opener "Bowl of Stone Around the Sun," and "Great Spirit," both having positive energy and engaging toe tapping tracks. "Prayer - Improv" is the only track that, like the title says, is a true improvisation, with Leena soothing vocals resting on top of an aggressive but not piercing music by the band. It swirls around itself like a gathering storm, but does not threaten to explode, just maintains an even tempered mode. "Song for Whitney" is not from the same sessions, but from a 2012 concert in Montreal, featuring just voice and piano; a straight forward ballad. "Potpourri" is just that, the musicians all playing different things, with Barnes quoting Lee Morgan from an early 60's album, but it has no structure. Not sure why it is on the album at all unless to fill out the space. Nevertheless, "Great Spirit" is worth listening to for the first four tracks alone, containing some substantial music, with soul and funk that prove that established forms of jazz music can still kick butt. Recommended.
Paul on Saturday, January 09, 2016
Share