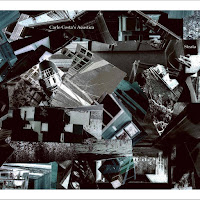 Carlo Costa is percussionist for the group Earth Tongues, whose album Rune was reviewed here by Stef. That recording is an exploration of sound, space, and the often tenuous threads that bind the two together.

Strata is a piece written by Costa, and it moves through similar territory. Performed by a thirteen-piece ensemble, it’s a transfixing combination of improvised elements and Costa’s own compositions. It is largely an exercise in egalitarianism and restraint; there is no tonal or rhythmic center, at least not for any extended amount of time. Costa’s purported intention with this piece was to “utilize layers of sound in different combinations ranging from spare single layers to densely stacked multiple layers while retaining a level of transparency throughout.” Thus, these layers comprise the sonic strata of Costa’s structure - a structure that mirrors geological phenomena in its smooth gradations, sudden shifts, and occasional displays of force. As far as I can tell, the piece has been segmented into five distinct sections, divided from one another by the sound of a ringing chime.

Section 2: The second section opens with spurts of air and hissing undercurrents; it almost sounds like the ensemble is being recorded in a field of bubbling geysers. The brass instruments (trumpet, trombone, and tuba) come together to produce an extended series of chords that are accentuated by the wide gaps between them. The pauses are pregnant and illustrate just how well this group makes use of space. Towards the end of this section, violist Miranda Sielaff bows out a sonorous and melancholic stream of notes that contrasts nicely with Todd Neufeld’s jagged productions.

Section 3:  The double basses, helmed by Sean Ali and Pascal Niggenkemper, produce a sustained moan, while pianist Jesse Stacken offers a simple, but cryptic, melody on the piano. On trombone, Ben Gerstein plays sparingly and reservedly, and Joe Moffett soon arrives with anomalous vocalizations through his trumpet. The flute and strings occasionally rise from the void, silky and ephemeral.

Section 4: The chime rings out, and bass clarinetist Jean-Brice Godet appears. Gradually, the other musicians insert themselves into the composition - Carlo Costa offers a rolling, slack rhythm, guitarist Todd Neufeld sends out a single, repeating chord, and the piano and horns are like leaves that have fallen to the surface of a stream, swept effortlessly along by the current beneath them. As this section progresses, Strata reaches a level of density that is unmatched by the half-hour that came before, with the strings tracing out a doleful lamentation and Costa increasing both the speed and complexity of his drumwork.

Section 5: Another chime. Now, the horns and reeds come together to generate a series of steely chords that are interspersed with bouts of silence. After the relatively opaque and crowded layers of the previous section, it’s doubly effective. Costa sweeps the cymbals, producing sibilant, metallic sheets of sound. Pianist Jesse Stacken returns with the motif that appeared in the third section, but he’s alone. There’s no soft pulse from Costa, no brassy peals, not even an airy exhalation from the reeds. The silence roiling behind his four notes is thick, complete, and intoxicatingly electric. When the final note has dissipated, it’s hard not to feel a sense of unease - largely because there’s no closure, no firm conclusion that wraps everything up and imbues it with a grand purpose. That’s not to say that Strata is hollow; it’s an enthralling work, and Carlo Costa clearly intended for it to be an expression of his own ideas about sound. Itis an exploration of the instruments’ various timbres and resonances, the way they interact in a closed space, and the effects that these interactions have on the ever-changing mood of the composition. With each listen, I come to appreciate Costa’s concept more and more, and I believe that it was executed near-flawlessly.

Carlo Costa’s website states that the ultimate result of the piece would be to create “the effect of a change of perspective in the aural space.” I think that Costa and the musicians involved were largely successful in doing so; listening to it is like occupying a palace of sound, in which the floors and staircases are constantly shifting, and doors that you intended to go through disappear, only to reappear in other places entirely. However, there is never a sense of chaos or turbulence - the movements here are glacial, deliberate, and frequently imperceptible. For a piece that utilizes thirteen musicians, it’s surprisingly minimalistic. The emotions and sensations that it conjures up, on the other hand, are immense.