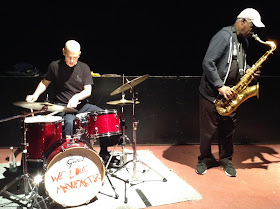 Wish I'd been there, Martin. Sounds terrific. Hopefully, they were recorded elsewhere on the tour. The three albums you mention are excellent

By Michael Flaherty, do you perhaps mean Paul Flaherty? Theirs is another storied free jazz duo (the only time I've seen Corsano play live-interestingly, opening for Joe McPhee and Peter Brotzmann!)

Yes, McPhee was quoting Dolphy, he said that in the concert.
And yes, Dan, it's Paul Flaherty, not Michael. Sorry for the mistake and thanks for pointing it out. Paul will fix it.

Yes, a truly compelling concert (I was there on the 8th in Paris' Instants Chavirés), with amazing sound and the stimulating link to history. Thanks Martin for helping to fix these memories!