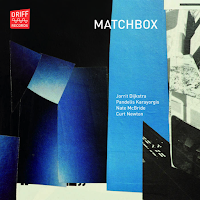 Labelmates Jorrit Dijkstra and Pandelis Karayorgis, who have been at the helm of Driff Records for a few years now, delight in creating structured improvisations that are challenging and demanding while still retaining a strong melodic foundation.  In this respect they clearly owe a good deal to the inspiration of artists like Steve Lacy, to whom they’ve paid tribute on three records now with the group the Whammies (on their most recent release, see Stefan Wood’s review).  Here they are joined by bassist Nate McBride and drummer Curt Newton, both of whom Karayorgis has worked with extensively, and as a rhythm section open to fluidity while still remaining well-grounded in pulse and meter, they’re hard to top.  The results are impressive, with ten enjoyable vehicles for post-bop exploration.

Dijkstra is a dynamic voice on alto sax, as he amply demonstrates on the record’s hard-charging opener, “Fourteen Squares,” or later on the record, with “All For It,” offering impassioned flurries of notes and incisive rhythmic conversation with Karayorgis.  He also brings a sensitive temper to some of the less aggressive tracks, including the loping “Drooze,” constructed around an almost danceable melody that Dijkstra establishes with grace and subtlety.  Somewhat less effective are the tracks on which he plays something called a “lyricon,” an electronic wind synthesizer that Dijkstra has been introducing into his music for some time—but here it tends more to distract than to complement the music.  I could only detect it on a few of the tracks, however, and for the majority of the album Dijkstra sticks to the conventional alto, on which he definitely shines.

Pianist Karayorgis’s debt to Monk has long been noted, and it’s clearly evident here in his quirky melodic and off-center rhythmic imagination.  But he’s also got a much more powerfully percussive side to his playing—a bit of Cecil Taylor shines through on the suitably named “Entanglement,” and it’s a lot of fun to hear him roam the piano with cascading clusters of notes, as Dijkstra joins in enthusiastically, contributing to the surging power of the track.

As for McBride and Newton, they bear out the advantages of their frequent collaborations, as they are highly skilled in supporting these intricate compositions and keeping things just under control, even during the more adventurous moments on the record.  This release is a very fine one, and more evidence that Driff is becoming a strong conduit for a terrific partnership of like-minded musicians.