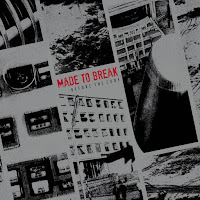 Out of Ken Vandermark’s many bands and projects, Made to Break proves to be, time and again, the vessel for his most creative outbursts and boldest ideas. Before the Code, the quartet’s fourth LP, is no different, rising from the intersection of free jazz, free improvisation, experimental electronic music, contemporary classical music, and enriched with distorted funk grooves. An amalgamation of styles that miraculously works out into an abstract, but coherent and at times hard-hitting whole.


Aside from Dutch musician Jasper Stadhouders replacing Devin Hoff on electric bass and bringing some additional fluidity into the mix, the group’s palette remains largely unchained. The bass still holds a very important piece of the puzzle, its thick and organically pulsing cues often the centerpieces of many segments. Meanwhile, Christof Kurzmann continues exploring the touching points of the analog and digital realms using electronic effects and the lloopp live-improvisation computer program. Much like in noise and minimal music, he goes for texturally simple but rhythmically and dynamically interesting sounds that either create structures using repetitions, glitches, variations in pitch, static, and haunting ambient noises that mimic digital machinery, or take the spot of the soloing instrument, dancing wildly above the rhythmic foundation. And while Ken Vandermark alternates between his trademark melodic playing, rock-like chords, and abrasive, sharp phrases that are reminiscent of licks found in his solo works, Tim Daisy slips in and out of hard, steady rhythms and unhinged, sparse brushes as if exploring an unknown dimension with his drumsticks.


All of these elements are arranged around Vandermark’s compositional framework that creates, in advance, basic outlines for the songs, but allows for surprising freedom of improvisation and flexibility both within specific segments and on a larger structural scale. It’s this framework that makes Before the Code as successful as it is, enabling the group to traverse the divide from free funk towards experimental electronic music with ease, only to plunge back into purely improvised, alien-sounding sections. What separates this release from predecessors such as Provoke is a distinct change in mood, as the record feels simultaneously more mischievous, implying an ironic perspective on the clash of the digital and the analog, the old and the new, but also more introspective based on the themes of the songs. Foregoing strictly philosophical motifs, the three tunes on Before the Code are instead dedicated to renowned directors, Agnès Varda, Joshua Oppenheimer, and Rainer Werner Fassbinder.


“Dial the Number (For Agnes Varda)” starts with a barrage of electronic effects, the saxophone and drums displaced and wandering, before a bass line steps out in the spotlight and takes the music into a great groove that will soon dissolve in the mazes of an electroacoustic labyrinth. This cycle will be repeated, as if retouching a photograph, several times during the song, all the while evoking words from Varda’s cinécriture. The second tune, “Off-Picture No. 119 (For Joshua Oppenheimer),” starts with Vandermark indulging in melodic saxophone flickers and Stadhouders fleshing out gorgeous bass lines. All of this will, again, break down into a mayhem of sounds. Nonetheless, the track never loses cohesiveness or its inner rhythm and rather ends with an amazingly fierce groove and an explosion of melody. Anyone who watched one of Oppenheimer’s movies, especially “The Act of Killing” or “The Look of Silence,” should recognize something familiar in this mixture of emotional layers, complexity, and tenacity. Finally, “Window Breaking Hammer (For Rainer Werner Fassbinder)” closes the album with some of the most left-field and spastic parts combining into a neo noir atmosphere that barely manages to hold closed the floodgates of another attack full of groove and spunk. A song as fractured as Fassbinder’s filmography phases.


All in all, this might just be Made to Break’s best release to date and also one of those albums with the potential to be placed in my top 10 had I not have missed them in 2015. Highly recommended!