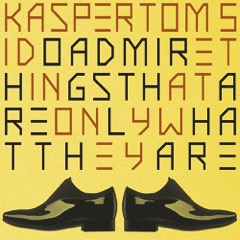 The architecture of Christiansen compositions and his tonal language does not attempt to follow conventional jazz sensibility. The seven new compositions, recorded live when the group was in top form, develop along loose outlines, based on fleeting melodies, patiently constructing and reconstructing the shifting, complex dynamics. The quintet alternates organically  between imaginative sonic searches to a clever exploration of the rich spectrum of the horns voices, articulating the melody from different angles and constant changing pulses, never settles on a conventional mode. The charismatic, commanding solos of  Mahal and Dąbrowski charge these pieces with poetic intensity and profound emotional appeal.  Their intertwining solos on “Play or Die” and the closing “Vranjo” are the highlights of this warmly recommended album. 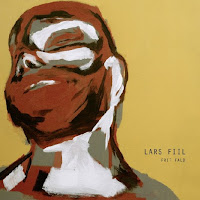 Copenhagen-based pianist Lars Fiil pianist began his career in a storm. In 2010 he won the prestigious Young Danish Jazz Comets with his quartet, and his quartet debut, Reconsideration (Fiil Free, 2011) featuring bass player Madsen (with whom he play in Madsen’s I Think You're Awesome),  was nominated for the Danish Jazz Award. But since then, unfortunately, his recorded output was quite limited. Fortunately Frit Fald (Danish for Free Fall), his sophomore album, justifies the waiting. It features his trio - saxophonist Lis Kruse, who played on his debut, and drummer Bjørn Heebøll, who collaborated before with pianist Agustí Fernández reeds titan Peter Brötzmann, three strong individual voices.

Fiil compositions have an elusive quality. All unfold slowly and gently as if following a highly personal logic and a unique sense of time and space, each one emphasizes different dynamics and atmosphere and all sound as challenging complex musical dilemmas but do not attempt to resolve it, but let it linger on long after the piece is over. The interplay is lyrical and intimate most of the time, stressing every breath, move or pulse of the fragmented melodies, enjoying the contemplative, highly poetic exploration of abstract, improvised  passages. Even when the trio interplay adopts a more playful mode as on “Afbryd Venligst Aldrig Altid”, or a searching one on “Improvisation #3” and “Improvisation #2”  it keeps its close and balanced chamber-like highly attentive dynamics.

Lars Fiil is a unique composer and improviser. Hope that he will not keep us waiting for his next release too long. . 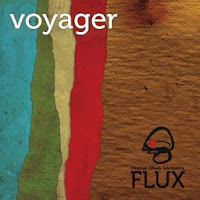 Voyager offers a mature but a very solid journey of the updated version of Flux. Jacobsen explains that his new compositions are informed by the constant touring experience. Eventually this experience led him to write more open-ended pieces, not binded by jazz legacy, each one alludes to the next, and all suggest an emphatic atmosphere of an inspired jam session. Flux charges his strong themes with clever interpretations, highlighting the individual voices of Møller, Porsborg and especially Visby, all three enjoying the tight rhythmic support of Jacobsen and Knudsen. The most interesting composition is the last one, “Long Johns”, spare yet highly cinematic piece, with haunting, melancholic tone. 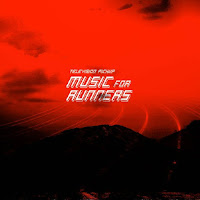 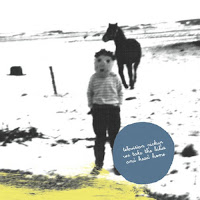 For Copenhagen-based composer and keyboards player Katrine Amsler the terms jazz and rock are simply four-letters words from a bygone era. She describes her Television Pickup band as an “android cinema orchestra playing songs from films you wish you had seen” and as a “Nightmare cocktail lounge, dystopian disco, a whimsical carnival from a William Gibson future”. She likes to experiment with sounds outside of their context, playing with counter-melodic and counter-rhythmic segments, clashing programmed instruments and preset MIDI sounds with live ones.

The double album offers Television Pickup in two incarnations. The current Music for Runners incarnation feature Amsler partner-guitarist Swedish Samuel Hällkvist plus guitarist Stephan Sieben, Swedish bass player Johannes Burström: and drummer Knut Finsrud. It offers a set of futuristic, kaleidoscopic sonic cocktails where you can taste almost anything- fat and poppish synthesizers lines, fusion virtuoso guitar solos, brief and chaotic improvisations and vocal art, all wrapped in tight, playful songs. These multi-layered songs manage to blend the almost-industrial, otherworldly electronic keyboards sounds with the technical wizardry of Hällkvist and Sieben, all spiraled by the tight rhythmic drive of Burström and Finsrud. The cinematic pieces have a lasting haunting emotional impact despite its programmed, distant and claustrophobic mix of sounds.

The 2010 We Take the Bikes and Head incarnation (released before as a limited-edition book in 2012) feature German sax player Thomas Backman, instead of guitarist Sieben, and drummer Michala Østergaard-Nielsen plays along Finsrud, augmented by vocalists Qarin Wikström, Erika Angell and Mike Højgaard. This album stresses another side of Amsler compositional ideas with a much warmer vibe. Her sonically hybridized compositions are based on evocative poetic stories and spoken word passages and wordless voices, offering a more structured narrative and accessible, rhythmic, song-like textures. These short songs have strong melodic themes, using much less programmed sounds., still, all suggest the highly idiosyncratic and iconoclastic language of Amsler. 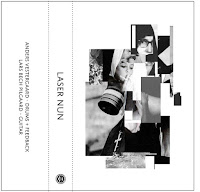 The duo itself testifies about its music: “ear-piercing feedback performed with a mix of omni-religious transcendence and laser-like stupidity”. True to its mission. the duo debut is released in a limited-edition cassette. The two sides, titled “A” and “B”, offer a highly inventive and quite varied torrent of noisy feedbacks, intensified by manic, massive drumming, and surprising by the powerful rhythmic drive of “B”. Both Pilgaard and Vestergaard keep pushing to the utmost climatic extremes and then some more, creating intense, ear-piercing textures of nuanced noises.