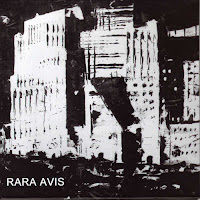 Rara Avis documents a relatively brief performance (just over 40 minutes), but the members make good use of that time, offering expressive and knotty improvisations that run the gamut from riotous and unrestrained (“Improvisation #1”) to glacial and tense (“Improvisation #9”).

In the first improvisation, they don’t waste any time. It begins with the instruments testing the waters, so to speak, but it quickly increases in both volume and tempo, eventually reaching a white-hot zenith; Bassist Pissavini bows the bass in wild flurries, and the others keep up with aplomb.

“Improvisation #2” opens with Vandermark on the bass clarinet. As the piece picks up pace, he veers off into the higher registers of the instrument, but he eventually withdraws, giving more space for Ferrian’s full-bodied tenor lines. The bass here is thick and effervescent, weighty bubbles that rise to the surface - Pissavini is a powerful player, and his robust lines act as an anchor to the comparatively protean productions of the reeds  In addition, SEC_ applies generous amounts of static to the underbelly of the piece. His contributions are never overwhelming, however, and they don’t drown out the work that the others are doing. The effect is that of a tape that has gotten stuck in the recording equipment, then subsequently chewed on, slightly damaged, and spat back out. I wouldn’t say that these sound treatments are integral to the flow and coherence of the improvisations, but they give one the feeling that the pieces are about to fold in on themselves at any moment. In some places, it’s unnerving, and in others, absolutely thrilling.

The third improvisation is a sparse and somewhat skeletal piece, with pianist Quatrana dictating the pace of the first half. By the mid-point, the others have joined in, and it soon erupts into a delirious, writhing mass of static, frenzied altissimo lines, and the clamorous tumult of the piano.

The sixth improvisation is something of a tone-poem, with each member contributing to the oppressive and disconcerting atmosphere. Ferrian produces a sporadic string of notes, while Vandermark plays a circular and manic melody that gets quicker and more tangled with each iteration. As Vandermark’s output quickens, so does Ferrian’s, and they are soon locked together in a fierce and sympathetic dance. In the seventh improvisation, SEC_ employs the method of recording a player and applying live alterations to the recording - as they continue to play! It’s quite effective, producing something akin to a ghostly after-image, one that has been distorted and stretched in peculiar ways.  In the next piece, Simone Quatrana produces a succession of rattling, clanking notes that are soon followed by extended wails from both saxophonists and persistent blotches of static from SEC_.

The final improvisation finds Vandermark on baritone saxophone, emitting guttural reverberations that eventually reach a fever-pitch; SEC_ layers the piece with static and tape effects, and Quatrana alternates between clean piano-lines and the clanking and clattering of the prepared piano. As on the rest of the improvisations here, when all of the members contribute to the tumult, an ecstatic whirlwind of sound is produced, one that is easy to get swept away by. On the other hand, the players are equally adept at forming more restrained and menacing sounds, relying on texture, timbre, and the space between notes to create the desired effect.

All in all, this is a fine release by Rara Avis, and it shows how fruitful the results can be when jazz incorporates elements from outside of its “realm,” so to speak. I’m really looking forward to the next recording by this group!