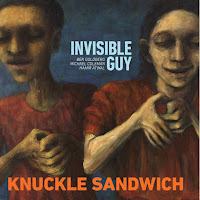 A word from Ben Goldberg on practice:

"Steve Lacy suggested learning all the notes through a systematized and methodical study of intervals, at first outside of tonal context, then puzzling out the possible tonal contexts.  He said that he developed the idea from writings or comments by Stravinsky.  Joe Lovano suggested taking a chord sequence (for example the blues) and playing it in all twelve keys every day.  Eventually I stumbled upon a rubato approach -- playing in meter but not in tempo -- that allows time to stretch to accommodate my slow mind.  Somewhere along the way Charlie Hunter suggested at a clinic we were doing 'put down the guitar and play drums for a year,' to strengthen the groove.  This led me to try to learn a way of playing drums and clarinet at the same time, so that the groove comes first."

Goldberg doesn't play the drums on this record - the sticks belong to Hamir Atwal here - but the emphasis on the creation of more "fluent melody" in Goldberg's improvisations and especially on groove materialize here in almost "rockish" quantities.  Knuckle Sandwich is certainly a noddable listen, but its title is a tad misleading.  Never as violent or heavy as it might immediately suggest, the record actually contains joyous music that seems joyously made.

Evidence comes immediately, as Goldberg blows out of the gate in 1 Through 8 with an arpeggiated riff repeated with the aforementioned mind to respecting and growing the groove.  Michael Coleman - on keys - fires some dissonant chords that remind me a bit of Ryan Ferreira's textural work on last year's Snake Oil offering, Lost In Reading.  The trio deconstructs the melody and appears to bang around the pieces a bit in short examination before the piece coalesces into a near-rock number, Goldberg's impressive fluidity on full display.  Follow-up, 9 = 2, seems to reveal a bit of Goldberg's musical past - particularly his former ensemble play with Deerhoof guitarist John Dieterich, as the track could easily (in both length and style) be a Deerhoof cut.

Hocus Pocus - retroactively named no doubt - sounds like a boardwalk magician's cheap conjurings - for a bit that is.  For all their abruptness, Goldberg's phrases are surprisingly lyrical.  Coleman's stabs again provide some necessary counterpoint.  They're especially effective when mirroring Goldberg's theme.  When they collide more fully toward song's end, the effect is almost psychedelic and one of the record's high points.  Citizen's Arrest finds Coleman at the piano.  The interplay here with Goldberg's clarinet screams of film scores and Gershwin.  However, without the full symphonic support, even the courageous playing falls a tad short of resolution.  Prelude to a Prelude is more interesting in title than in practice.  It stinks of nature, all waterlogged notes and dead keys, a gust of wind, and finally, appropriately, a sunrise.

Travels slogs a tad after Prelude to a Prelude, but Cold Weather and AMR follow with some of the record's most beautiful, inspired playing.  9+5 concludes and delivers the punches hinted at all along (and delivered in spots on Hocus Pocus).  The playing is frenetic and free before Atwal drops into a true plod, a heavy-handed stoner rock pattern.  Coleman and Goldberg follow him out.


Goldberg calling his mind in any way "slow" is almost laughable.  This isn't the most fiery playing I've heard and it's not particularly as furious as I typically prefer my music, but the lyricism and scope of the piece are without question.  The ideas throughout are strong.  I would really like to see the themes created in Hocus Pocus and9+5 examined more fully and expanded, perhaps to a full records.  For now, Coleman and Atwal provide a solid base and Goldberg flies atop, groove ever in his mind.