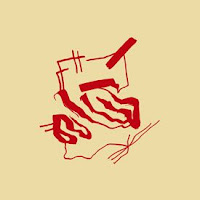 Konstrukt have another live record out on the fantastic Italian, experimental/free/improv label Holidays.  This one features the core group, with no appearances by favorite collaborators Joe McPhee or Peter Brotzmann.  As someone that is relatively new to the Turkish quartet, I’ve been listening to as many of their records as I can get my hands on to get an idea of their style.  I think I can now say that their signature style revolves around dynamism.
Konstrukt are most rooted in free jazz to be certain, but like many of the modern bands in this arena they neither fit neatly into the molds of New York loft jazz, or the offshoots of creative music coming out of Chicago, Europe, etc. shortly thereafter.  They draw a lot of their style from modern experimental music, using a lot of electronics and affected instruments to create droning, ambient textures throughout.  They also touch on psychedelic music quite often, best demonstrated on Sun Ra-esque electric organ boogies over washing sounds of static and dissonance.

This live set starts with some very free drumming reminiscent of Sunny Murray; all cymbals and snare, no time keeping.  A low grumble of electronic drone remains consistent in the background, slowly shifting guitar tones set the tempo, oscillating and sounding like it’s going through a wah pedal.  The reeds soar over this in ecstatic bursts of lyrical phrasing and short adventures into high register squeaks and skronks in-between.  Korhan Futaci shows that he is definitely a very capable player.

The focus shifts and the guitar and reeds begin to establish some interplay while the ominous droning continues underfoot.  Ozun Usta’s bass starts to pop up more in places and helps to bring things back to the jazz genre at times.  My only complaint would be that we didn’t hear enough of this.
The rest of the album effortlessly moves in and out of style, and some of the players multi-instrumental leanings help with this.  The sections where the guitar is replaced with flute are excellent as well, as it mixes in with the reeds and does everything from providing textural underpinning to lyrical soloing. The rhythm section, too, goes from totally free into a somewhat disjointed fusion funk.  When the guitar takes the lead there are some beautiful/destructive shades of Sonny Sharrock present.  There are also very spacey moments of sparse percussion with introspective flute playing over top of it.

I think what Konstrukt does best is pull together related but different forms of music and improvisation and ties them into a nebulous but purposeful approach.  It doesn’t feel too scattered or unrelated at any point, which is a good thing.  Some of it is definitely reminiscent of older free jazz musicians, but none of it is mindless aping.  They have an effortless ability to flow in and out of styles and moods, but at the heart they have a unique style that is more than just the sum of its parts.


If I had any complaints it would be that maybe they release too many albums (which is really a complaint based on not having enough money to get so many records shipped over from Europe!) and that maybe some of the albums could be edited down.  It’s fantastic that we can hear so much of their playing, especially because free jazz is a genre where we sometimes have limited access to a musician’s recordings, but there is something to say for being very deliberate and selective when it comes to releases.  Regardless, I’m ready for the next one.